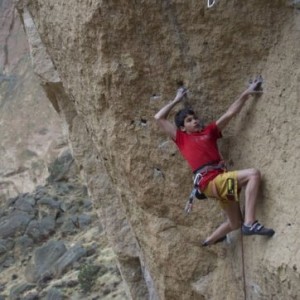 Shannon and I spent the Cinco de Mayo weekend down at Smith Rock helping out Yukon Trading Company at their annual Cinco de Marmot event. Yukon puts on the event every year for big outdoor retailer companies like REI employees to come out and enjoy a few days testing out some Marmot gear and getting to try some rock climbing at one of the most historical sport climbing locations in the world. Shannon and I played rope gun and spent the day putting up some top ropes and belaying the retail employees so they can get some taste of some good climbing. Overall, the weather was beautiful, the people were fun to work with, and Marmot was a generous host!

On Saturday we had the opportunity to try a route or two for ourselves before the sun went down. My goal for the weekend was to climb the aesthetic Smith classic Rude Boys (5.13b/c). On my first attempt I cruised through the bottom part until the fourth clip where I misjudged the distance to the next hold and missed the good part. After sussing out the move, I pulled back on and worked my way through the overhang until I found myself staring up the intimidating 45-50 foot remaining slab. At first, my intentions were to not climb the slab unless I had gone through the bottom clips clean, and I ALMOST talked myself out of it, but I knew I needed to do it. I have been struggling with committing to any sort of small run outs or big falls, so I convinced myself to at least go to the first bolt onto the slab before calling it quits. I got myself mentally prepared and pulled through the first ten feet of slab to the first draw only to find a pretty good recovery hold. Although I recovered pretty well, I still found myself staring into the unknown 15 feet between the next bolt. Again I pushed through and remained calm only to find that the next bolt also had a pretty decent rest and clipping position. The next and last bolt seemed the trickiest and the holds in between seemed the most sparse and small, but since I had gone that far, I had to finish it. The last bolt turned out to actually be a nut with a carabiner wedged into the small crack coming off of a huge jug. Upon clipping the bolt I started to laugh and thought “only at Smith”, which relaxed me a whole lot and I quickly ran up the next 10 feet to the chains.