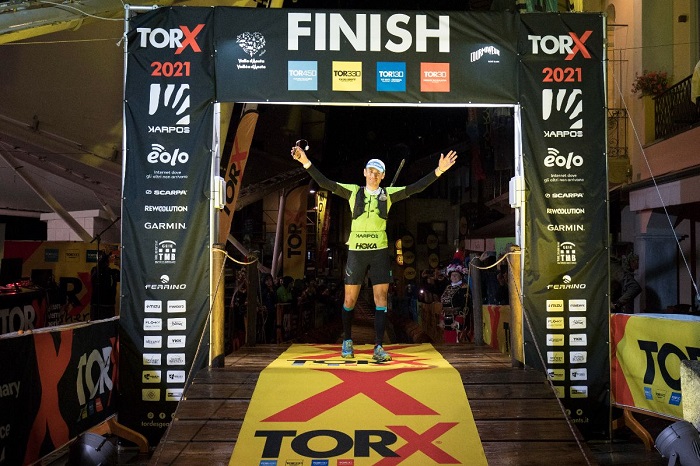 In the last, decisive part of the race, the runner from Aosta Valley outdistanced the Swiss Russi and won for the third time the most prestigious TORX® race in 66:43:57, lowering the previous record by over an hour.

Franco Collé crossed the finish line at 4:43, smiling despite the third night of competition and the pouring rain. With this third, well-deserved victory (he is the first to win for three times), he confirms himself as the king of the TOR330 – Tor de Geants®. “I wanted to get to the finish line at all costs, I promised myself not to give up despite the problems I had in the race, to redeem the withdrawal of two years ago. I am happy for this record. I thank the public, its warmth. After two years there was a great desire for TOR!”.

Always lucid and strong of his experience in the management of a race as long and complex as the Tor des Geants®, Collé imprinted the race with an impressive rhythm that, together with the final victory, allowed him to lower by more than an hour the previous record that belonged since 2017 to the Basque Dominguez. As for the Swiss Jonas Russi, who remained by his side until last night, as soon as the battle was on, he could only take note of the Italian’s superior pace, collecting over an hour and a half gap.

The rest of the podium will be defined during the day. In the evening, instead, the first of the TOR130 – Tot Dret, which started last night from Gressoney-Saint-Jean, are expected to reach the finish line.