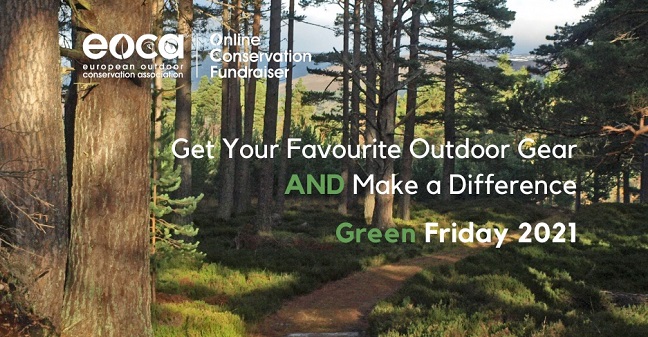 Following the European Outdoor Conservation Association (EOCA)’s fundraising event for the Green (Black) Friday weekend at the end of November, the association is delighted to announce that nearly €57,000 was raised, which will help support urgent conservation projects funded in 2022.  In the wake of the opening of COP15 in China last October and the COP26 Conference in Glasgow in November, there has never been a better time to proactively ensure as much as possible is being done to direct funds to where they are needed the most, combatting both the effects of climate change and the dramatic loss of biodiversity this planet is facing.

A number of EOCA members stepped up to help raise a considerable amount of funds. Adventure.ie, AKU, deuter, KEEN, La Sportiva, LESOVIK, Nikwax Germany and Stanley all generously donated a percentage of sales from their websites during the week leading up to, over and beyond the Green Friday weekend to EOCA.  Money raised by deuter, KEEN, La Sportiva and Nikwax Germany will be directed into specific projects currently being funded by EOCA, all of which are working to mitigate against climate change and the loss of biodiversity.

KEEN not only decided to collect money for a specific project, but also asked its fans in the weeks leading up to the Green Friday event to vote on which project that should be! €10,000 will be going to the Forest Seeders project in southern Spain, which will restore 50 hectares of Mediterranean forest in Sierra Lujar, reducing flooding, soil run off and fires.

La Sportiva has been supporting EOCA through their own Green Friday sales since 2017, and was the first EOCA member ever to do so.  This time, the Italian technical footwear and clothing company had a very successful Green Friday weekend, donating a large percentage of its of sales over 3 days, which resulted in an incredible €15,000 being raised!  This generous donation will be put into one of EOCA’s current conservation projects, chosen by La Sportiva.

A number of companies donated items to Outdoor Gear For Good, a community interest company (non-profit) which collects end of line, returned or repairable items throughout the year, to prevent them going into landfill. A wide range of quality products were donated by BUFF, Lowe Alpine, Nikwax, Ortlieb, Osprey Europe, and POMOCA for sale on Outdoor Gear for Good’s UK eBay site, the profits of which were given to EOCA.

Finally, and separate to the Green Friday fundraiser, other EOCA members were working for the good of the environment over the same weekend:  Tentsile doubled the number of trees it planted in recognition of purchases made on its website, and Cumulus gave 100% of sales from specific products to rewet, restore and save vital pristine wetlands in Poland.

Tanya Bascombe, Joint General Manager of EOCA commented, “EOCA was able to put more money than ever before into conservation projects in 2021, but it is imperative that we are able to keep raising money to fund much more. Our planet is in crisis through the damage we have done and are continuing to inflict on it. Protecting wild landscapes, restoring those that have been damaged and creating conditions whereby ecosystems can repair themselves and function as they need to, is vital if we are to have any hope of living on a thriving planet in the future. EOCA is thrilled and very grateful that so many members have chosen to get involved, not only raising funds for EOCA’s conservation projects, but also for those on their own doorsteps too”.