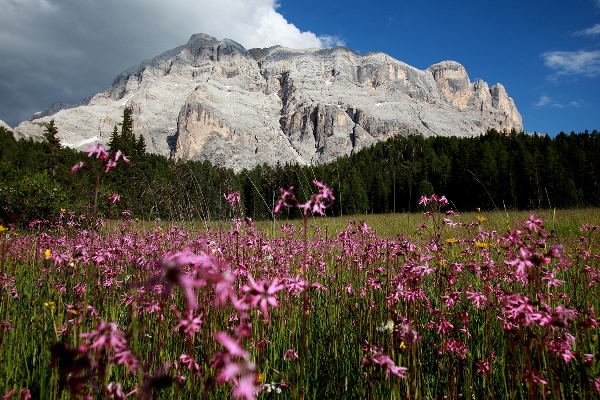 From 5 to 7 September 2014, the UNESCO Dolomites Foundation with the technical help of Isoipse will launch the first Labfest of the UNESCO Dolomites in La Val in Alta Badia. An event intended to bring inhabitants of the Dolomites and tourists together on an extremely important issue for the mountains: the mowing of meadows. AKU will be an active partner in the event.

In the outdoor business world, concepts and images tied to performance, records, speed or ever more spectacular feats by now seem to prevail as if it were the norm.

AKU, however, decided some time ago to follow a different route, one that is in line with its history of a firm that was created and has grown alongside those who live and work in the mountains. In fact, AKU manufactures mountain sport footwear that reflects these origins.

When you live in contact with the upland world you learn to share its beauty and fragility, you learn to cope with an environment where development and conservation, modernity and tradition live side-by-side. AKU’s social and environmental responsibility has evolved from this awareness. In its capacity as manufacturer of trekking and mountaineering footwear, AKU is committed to assimilating concerns of an ethical, cultural and environmental nature into its strategic business overview.

All these considerations plus a common determination to protect the uniqueness of the Dolomites has led to AKU’s decision to support the Labfest of the UNESCO Dolomites.

From 5 to 7 September 2014, the UNESCO Dolomites Foundation, with the technical help of Isoipse, will launch the first Labfest of the UNESCO Dolomites in La Val in Alta Badia: a festival intended to stimulate creativity and cooperation among the peoples of the Dolomites and, together, to interest and involve tourists in a very important issue for the mountains: the mowing of meadows.

Mowing is an age-old yet current topic, ideal for talking about the real mountains that need upland farmers to preserve the beauty and variability of the landscape rather than maintaining the stereotype picture postcard image of the mountains. Three sevenths of the entire European flora are to be found in the Alps and mountain farming is a fundamental element in conserving this heritage. Meadows offer some of the greatest biodiversity and value in terms of nature and landscape in the Alpine environment. Their survival is, however, at risk if the traditional activity of mowing is stopped. Where meadows are not mown, there is not only a loss of surface due to the invasion of trees and shrubs (in the Bellunesi Dolomites National Park it is estimated that woodland is advancing at approx. 1-1.5 m/year), but also a change in the floristic composition with the disappearance of rare species such as many orchids.

The festival will consist of several events. Various experts and interested persons from the fields of geography, architecture, town and landscape planning, anthropology, natural sciences, economics and tourism will be involved in the subject of mowing. And there’s more: environmental journalism, documentaries, land administration, music and literature, theatre, cuisine, photography. Naturally there will also be time for some hiking and recreational activities as well as time to discuss the delicate balance that lies at the basis of men’s life and of nature in the Dolomites.

AKU will take an active part in Labfest of the UNESCO Dolomites by supporting the activity of communication to its own public and, within the scope of the event, by providing an opportunity to wear AKU products: those going on the hikes will be able to try out certain AKU models of footwear, which will also be worn by a team of mowers.

Labfest of the UNESCO Dolomites: http://www.dolomitesunescolabfest.it/

A true story of Italian manufacturing tradition AKU, an Italian company founded by Galliano Bordin, which has grown from a small workshop into an industry, has more than thirty years’ experience in the design and production of high quality trekking and outdoor footwear. The AKU collection ranges from mountaineering boots to active free time footwear and behind each model lies a genuine love for manufacturing, built on the age-old prestigious tradition of Italian workmanship.
more