Mountain endurance brand DYNAFIT cleaned up with its 2018-19 Winter Collection at this year’s ISPO Awards. The heritage brand with headquarters in Aschheim near Munich, Germany, secured not one, but two of the coveted ISPO Gold Awards: The Hoji Pro Tour ski touring boot and the P49 Pin Tech Binding each received the respected award in the Snowsports segment. With both of these ISPO Gold Awards, DYNAFIT again impressively underscores its pioneering role as a driver of innovation for ski touring sports. The brand is also setting new standards for Winter 2018-19 in terms of weight, technology and versatility.

With the ISPO Awards, the leading international sports business network, ISPO, each year honors the outstanding products of the sports market. Independent expert panels of judges review and test several hundred entries based on precisely defined criteria. This year, approximately 400 products applied, with more than 200 alone in the Snowsports segment where mountain endurance brand DYNAFIT won its awards. The company is thrilled with its 2018-19 Winter Collection and the two coveted Gold Awards: Ski touring boot Hoji Pro Tour secured the renowned Gold award in the Snowsports segment, in the Freeride/Touring Boots category. The boot is transformed with one quick hand motion from an efficient and lightweight climber with the highest possible freedom of movement into an alpine downhill miracle. In doing so, it pointedly refutes the basic question of ski touring — climbing or downhill oriented? In the Snowsports segment, in the Ski Touring Bindings category, the new Pin Tech Race-Binding P49 thrilled the international expert panel of judges and also won Gold. More than 30 years after the invention of the Low Tech Binding, DYNAFIT with its P49 is totally turning on its head the concept of pins and inserts. This has allowed developers in Aschheim to significantly shave weight — The binding weighs a mere 49 grams and makes entry into the frameless binding for ski racers much simpler and more efficient.

“DYNAFIT is THE driver of innovation in ski touring. Both ISPO Gold Awards demonstrate that we have followed the correct path,” declares Benedikt Böhm, International General Manager of DYNAFIT. “Speed, lightness, technology and endurance — that is what DYNAFIT stands for with its products. Naturally, the Hoji Boot as well as the P49 Pin Tech Binding embody these values in an impressive manner. We have not shied away from thinking a little differently, nor from putting a lot of time and commitment into the development of true innovation. We are therefore even more thrilled that we have been honored and recognized for our courage by the ISPO jury’s panel of judges.” 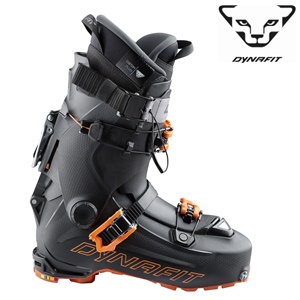 HOJI PRO TOUR – The Revolution in Ski Touring Boots. Should a ski touring boot be oriented more for the ascent or the descent? As of Winter 2018-19, this basic ski touring question will finally be a thing of the past because DYNAFIT has eliminated the question of “either-or.” Now, it is simply both. With the Hoji Pro Tour the mountain endurance brand is launching a revolution in ski touring boots. It is setting new standards when it comes to functionality, handling and comfort. With one simple motion, the boot is transformed from an efficient and light climber with excellent freedom of movement into an alpine downhill miracle that will thrill with its rigidity and optimum power transfer. Performance compromises? Not with this boot – and the same goes for cold fingers or stressed-out fumbling around when switching between climb and ski modes. Thanks to the patent-pending Hoji Lock System, the switch between modes is child’s play and utterly comfortable with just a simple kick of the boot: The ski/walk system’s mechanism is an integral part of the closure system — consisting of three buckles and an Ultra Lock Strap. So, the boot is adjusted with just a single lever.

What the ISPO panel of judges said: A long-awaited product. Best simplicity on the market when it comes to switching from ski to walk and back. Great design and superb fit. 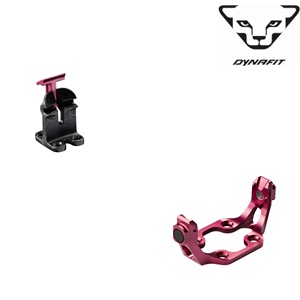 P49 — The new era of pin bindings begins. Please step in — and quickly! For the 2018-19 winter season, DYNAFIT is turning the entire concept of a pin binding on its head. In doing so, it is living up to its name as the technical pioneering leader of ski touring. Instead of the time-tested combination of the last 30 years of two-sided pins on the toe piece of the binding with the corresponding inserts on the ski touring boot, spring-loaded pins will now be directly set on the boot toe. At the same time, the ski touring specialist has re-engineered the heel mechanism. The new patent-pending system will initially be found for racing on the ISMF-certified P49 model with the matching DYNAFIT DNA Pintech by Pierre Gignoux race boot. The benefit of the new concept? Stepping into the binding will be significantly easier, more comfortable, and faster. This has also allowed the binding’s weight to be greatly reduced. Weighing in at an ultralight 49 grams, DYNAFIT is setting totally new standards with the P49 and, with that, making the race against the clock even more efficient.

What the ISPO panel of judges said: Taking Tech bindings to a new level with the astonishing weight of 49 grams. By changing the ‘perspective’ of the toe piece, it improves step-in and performance.

The Dynafit brand is for people who live mountain sports and Dynafit is committed to serving all ambitious ski mountaineers. The South Tyrolean brand constantly strives to make the ski mountaineer stronger in all aspects of the sport. All materials and fabrics are carefully sourced, selected, tested and finally implemented. No product management decision is made without a clear 'GO' from our ski mountaineering teams. Our four corporate divisions Boots, Bindings, Skies and Textiles work hand in hand with top teams of mountaineering experts. This is the simple reason why we are always way ahead when it comes to innovation in the ski touring market, be it with the lightest binding made of titan, a carbon boot, or the lightest ski-core technology on the market. Dynafit is an ultra technical brand that often exceeds consumer expectations in a provocative manner. Dynafit challenge is having the lightest, highest performing, yet most trustworthy material at hand. DYNAFIT people reach the top in the fastest time, with the best feeling, and with plenty of power left for the ultimate powder ride. www.dynafit.com