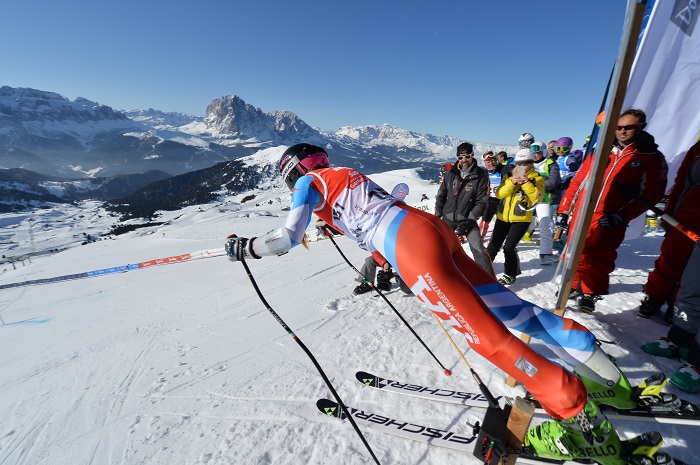 The 23rd Südtirol Gardenissima, which unfolds on Saturday, March 30 next, looks set to be even more spectacular and exciting than ever. The renowned season-closing classic has attracted a particularly impressive line-up this year. Representing the Italian Blues will be leading national skiers Christof Innerhofer and Federica Brignone.

Saturday, March 30, marks a truly stylish return for the annual Südtirol Gardenissima, the world’s longest slalom as Val Gardena’s pistes play host to one of the classic closing event of the 2018/19 skiing calendar. The giant slalom course stretches over 6 kilometres from the top of Monte Seceda at 2,518 metres to the finish-line at Col Raiser via no less than 110 gates!

AN EXCEPTIONAL LINE-OUT. A total of 680 skiers will line out at the start, with 15 nations represented. There is huge excitement around the entry of Christof Innerhofer. The powerful Alto Adige athlete was crowned Super G world champion at Garmisch in 2011 and was twice on the podium at Sochi in 2014. This time out, he’ll be going head to head with skiers from all over Europe, including Daniel Danklmaier, Raphael Haaser, Alexander Prast, Hannes Zingerle, Giuglio Bosca, Cristian Javier Simari Birkner, Simon Maurberger und Alex Hofer, as well as the junior hopeful of Val Gardena, Alex Vinatzer .

In the women’s line-up all eyes will be Federica Brignone and the sisters Nicol and Nadia Delago.
But not only the big names of the ski circus arouse curiosity, but also other participants like Andreas Goldberger, the successful ski jumper of the 1990s, will also take part in the giant slalom in Val Gardena.

SKI LEGENDS. Today’s top skiers and up-and-coming talents will be flanked by a group of famous former skiing stars.  Giorgio Rocca, bronze medallist of three World Cups, will be tackling the run and doing battle with Oskar Delago, Isolde Kostner, Daniela Zini, Paola Magoni and Thea Gamper. Jürgen Egle from Vorarlberg is the first forerunner. He is paraplegic after an accident and has won 11 medals on his monoski at Paraolympics and World Championships.

For the well-being of the participants and spectators the local hotelier and restaurant association as well as the farmers’ wives take care of the finish area.

The award ceremony will take place at 3.30 pm in the Iman Center in S. Cristina.

Afterwards the day can end at the “After Race Party Sëlva ” in the centre of Selva Gardena with the group “Ugle Cute & Volxrock“.

MAKE WAY FOR THE YOUNGSTERS. The main event doesn’t mark the end of the action, by any means. The adults’ race will be followed the next day, Sunday, March 31st, by the Südtirol Gardenissima Kids for very young skiers born between 8 and 13 years. The distance is shorter but follows the same format as the grown-up race: competitors start in pairs and do the first section of the giant slalom on parallel runs which then merge into a single one in the last section. Entries are open until March 29 for a promotional event that delivers a mix of fun and competition to attract more families and youngsters to the winter sports world.

Head, Rossignol, Dynastar, Blizzard, Nordica and Elan will be at the test to present the latest racing skis for the 2019/20 season.