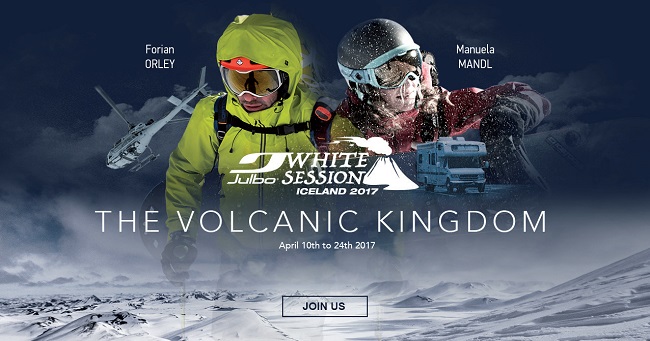 The Julbo White Session is back, and will be held in Iceland next spring. For this 6th edition, we’re once again giving an amateur the chance to join our adventure with freeride snowboarding legend Flo Orley and Freeride World Tour rookie Manuela Mandl.
Are you ready to accept the mission?

PRESENTATION OF THE TRIP
«In Iceland everything constantly reminds you that our planet is well and truly alive! The volcanic activity, imposing mountains and movement of the ocean all around us made me realise that mother nature is much closer to us here than anywhere else I’ve been. This place is truly magical!» Flo Orley – Freeride legend. A magical but vast place.
Apart from the capital where three quarters of the population is concentrated, the rest of the island is pretty much deserted. To make sure the Julbo White Session team is fully mobile and properly equipped, a motorhome will be provided so they can travel every road and get close to the best spots. It will be their roving headquarters for the two weeks of the trip, from 10 to 24 April 2017.

AIMS
The agenda dreamt up by the Julbo athletes is mouth-watering, as Manuela explains: «We’re going to immerse ourselves in the elements and find a way of interacting with them. I’m already delighted to be riding crazy lines with the northern lights in these majestic landscapes.»

The aims of the trip will be to:
• climb and ride the slopes of the famous volcano Eyjafjallajökull in the spring. You’ll remember that this is the volcano that paralysed the skies of Europe in 2010. The summit is normally climbed during the summer months, so the April weather will add some spice to the challenge.
• go see the centre of the earth, according to Jules Verne, by hurtling down Snæfellsjökull which is located in the east of the island on a peninsula. At a height of 1466 m and surrounded by water, this mythical mountain is a must-see when in Iceland.
• open new routes in the north of the island in the Troll peninsula, arriving by helicopter, or boat and walking in if the weather’s too bad to fly.
• get dropped off by a ski plane on the glacier plateau of the Vatnajökull, Iceland`s largest glacier, set up of a winter camp and climb some of the spectacular peaks in the area.

FLO ORLEY & MANUELA MANDL: SNOWBOARDING BUDDIES
Flo Orley and Manuela Mandl know each other really well because Flo is the coach of the young rookie. They’re both athletes at Julbo, and decided to set up this Julbo White Session together. Flo has already been to Iceland to attempt virgin faces in the north of the island but the lack of snow put paid to his plans, so he’s out for revenge! Manuela Mandl finished first in the Freeride World Tour Qualifier in 2016 and is now just waiting to achieve her dream: to make a living from snowboarding. They both want to share their adventures with you and give you a unique opportunity to join a trip that already looks set to be explosive.

JOIN THEM
If you have an adventurous spirit and are looking for wide open spaces and unusual challenges, this Julbo White Session is for you. Accompanied by our two snowboarders and a production team, you’ll star in the next Julbo film, and this adventure in the kingdom of the volcanoes will leave you with you memories for life.

HOW CAN YOU BE PART OF THIS ADVENTURE?
Simply make a one-minute video to show us your freeride ski/snowboard level.
Be creative and original and show us that you’re just as happy on your skis/snowboard as facing the camera.
You have until 15 February 2017 to send us your application and video.
The selection criteria are: ski or snowboard level, personality, attitude, physical capabilities, ability to communicate, physical condition and experience in mountainous terrain. A single participant will be selected to go to Iceland with Flo Orley and Manuela Mandl, together with cameramen and photographers, from 10 to 24 April 2017. The winner will be announced on 1 March 2017.

Founded in 1888 and based in the Jura (France), Julbo is a benchmark sports eyewear brand. Famous for its technical expertise, Julbo is following its own values and creative drive to become a global sunglasses and eyewear player. Julbo’s mission: finding the best solutions to protect our eyes and allowing all of us to see the world better. www.julbo.com