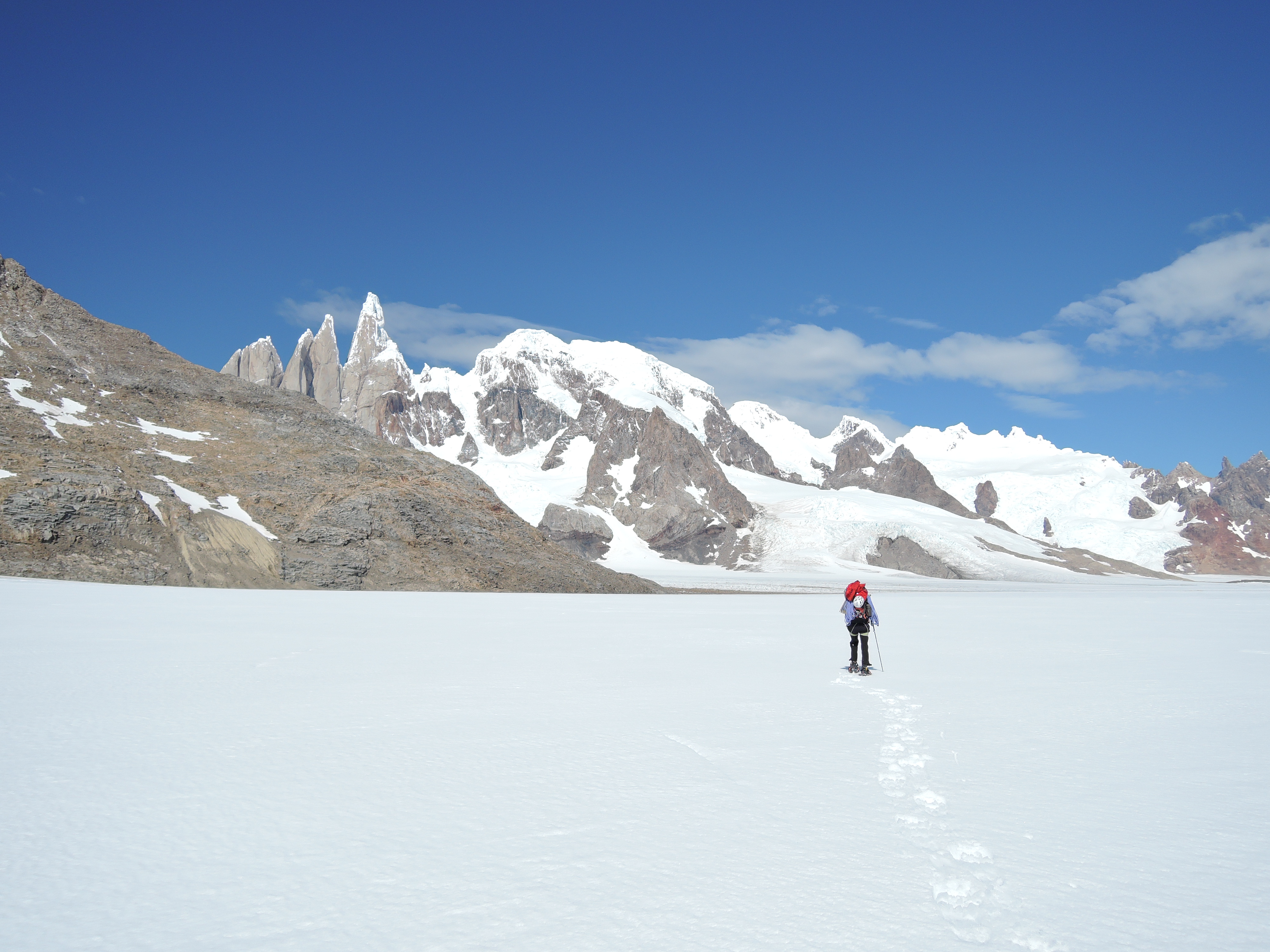 At the end of February 2015, Marmot PRO Christina Huber and her climbing partner Caroline North made the first free and unsupported female team ascent of the Via dei Ragni on Cerro Torre. The only other all-female ascent of Cerro Torre was back in 2005, when Monika Kambic and Tanja Grmovsek climbed the Compressor Route. During that ascent Monika Kambic was injured by falling ice on the headwall and to reach the summit they had to jumar the crux pitch on a rope fixed by another party.

After returning from Patagonia, Christina got in touch to tell us about her trip and her experiences on Cerro Torre.

‘‘Caro and I had talked about going to Patagonia (El Chalten) back in the summer but it was October before we finally got our flights booked. Right from the start it was clear to us that we would have to get really lucky with the weather if we were going to have any chance of doing a big peak in the short time I had available. I only had three weeks max before I had to be back at college.

February 14th was my last day at college before the semester break. The following day, full of excitement, I set off for Argentina. Arriving in El Chalten, I could hardly believe my luck — – the first weather window was due to arrive in just a few days. Caro and I decided to make the most of it. Opting for a slightly longer approach but with less up and down, we set off on February 18th and headed for the Passo Marconi, pitching our tent just before the start of the glacier. On the second day we went over the pass and across the Southern Patagonian Ice Field to the Circo de los Altares, where we camped for the night. Friday was an easier day, climbing up to the bivouac site at the base of the Elmo. On the way up, at the Col de la Esperenza, we met a Slovenian team (Luka Lindic, Luka Krajnc and Tadej Krišelj) who had just done the Adela traverse and were also intending to climb the Ragni Route the following day. In the early evening, Caro and I sat and chatted with the Slovenians at the Elmo bivouac (we knew that it would have been crazy to bivi on the Ragni Route in the sunshine). We even had music, as the Slovenian team had brought a couple of little speakers with them. 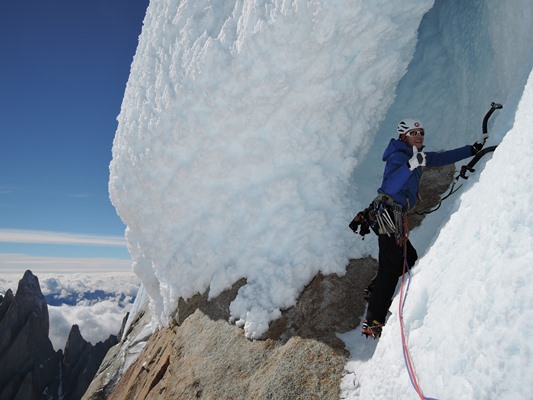 The alarm went off at 2.30 in the morning. We ate breakfast, melted snow, took the tent down and buried our surplus gear in the snow, and at 4am on the dot Caro set off climbing straight from the bivi. After the first few pitches to the base of the Elmo it was my turn to lead the first proper pitch on the Elmo. We knew from talking to other teams that this pitch was not to be underestimated this season. The snow was deep and unconsolidated in places and I fought my way up a short, slightly overhanging section into a kind of snow-ice gully that had some good gear placements. It was still dark as we climbed the following two mixed pitches but I was able to lead the third in the daylight. The view at that time of the morning was just incredibly beautiful, although we didn’t have much time to enjoy it as we worked our way up to the Headwall. This turned out to be easier than expected, which was good. It was followed by three long pitches and a short one, with the whole range of snow and ice types, including snow-ice tunnels and rime ice. By 14 o’clock the route was in the bag as Caro cruised the last pitch in a stylish display of climbing to stand on the summit of Cerro Torre. The view from up there was breathtaking: out over the Ice Field and over to Fitz Roy, Poincenot and El Chalten — – a stunning 360° panorama that I certainly won’t forget in a hurry. Man, we were stoked!

But getting to the summit was only half way — – we still had the descent to do. We rappelled down to our last bivi spot and dug out the gear we’d stashed there, then carried on down to the Circo de Los Altares. So far so good. It had been a long day so as the sun went down we decided to pitch the tent, eat some food and get a couple of hours sleep. Sunday morning we set off very early. The whole day was one big fight against the wind and after a 20 hour slog we arrived back in El Chalten, dead tired but still smiling.

I would like to thank Rolando Garibotti for his incredibly helpful advice and support during our stay in Patagonia. A big thank you also goes to my sponsors and my family. Thanks guys!’’

In April 1971, University of California Santa Cruz students Eric Reynolds and Dave Huntley were in Alaska on the Juneau Icefields on a school project in Glaciology. It was here on the glacier, amongst these students, that the idea of a Marmot club began. To become a Marmot, you had to climb a glaciated peak with another Marmot. One of the rules of the club was that everyone was president. Most of the other rules dealt with the collegiate fascination with bodily functions. That summer and through the semesters until 1973, Eric and Dave made prototypes of down products in their dorm room in Santa Cruz. Their first products were a down vest, a sweater and a parka and, later, three down sleeping bags. The warmest bag, the PIKA (now known as the Cwm) was rated at -45 degrees F and retailed for $168. Eric did a winter ascent of the Grand Teton in Wyoming with Tom Boyce of Grand Junction, Colorado in 1973. Eric and Dave joined Tom in Colorado that next Spring. There, the threesome rented a 100 year old stone building near downtown that used to be a grocery store, and opened a rental and retail shop under the name of Marmot Mountain Works. They taught cross-country skiing in the winter to get by. Thus, in the spring of 1974, Marmot the company was born. more…
more