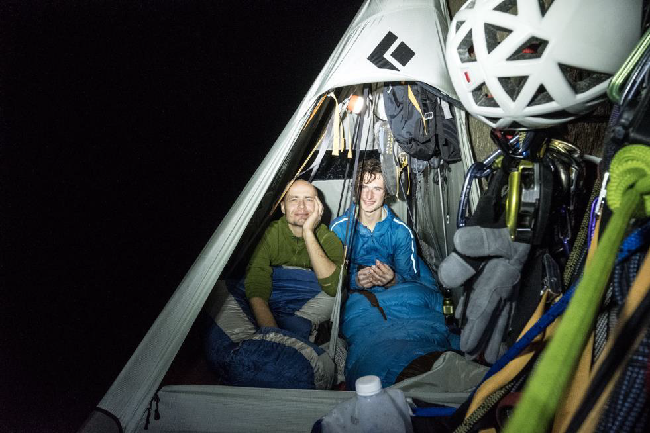 The superman of climbing has succeeded in ascending the hardest big wall. He is not only an exceptional athlete but leaves an impression with his focus and dedication. By keeping his cool and calculating rationally, Black Diamond athlete, Adam Ondra was able to scale his latest target: to repeat 32 pitches with difficulties up to 9a (5.15). After six years of working on it, in the beginning of 2015, Tommy Caldwell and Kevin Jorgeson were able to first ascent the Dawn Wall (USA). Adam Ondra managed to free the route on 21.11.2016 after spending 5 ½ weeks in Yosemite. He was accompanied by his climbing partner Pavel Blažek and photographer Heinz Zak.

Tommy Caldwell and Kevin Jorgeson made the first ascent of the Dawn Wall, Yosemite, USA, in the beginning of 2015. They climbed the 32 pitches as a team within 16 days. The Dawn Wall is considered the hardest big wall worldwide.
The dimension of the Dawn Wall becomes obvious when looking at the media coverage. Even US-president Obama congratulated Caldwell and Jorgeson. For six years, Tommy Caldwell had projected the Dawn Wall. His vision, his motivation and his drive to push the limits inspired hundreds and thousands of people. Thus, the Dawn Wall not merely came to be a milestone in climbing, but became a symbol for many people – demonstrating that with passion and willpower, even the seemingly impossible is attainable.

Adam Ondra is possibly the strongest climber in the World and until now did not have any Big wall experience. His climbing partner comments: “We both find it quite funny – Adam never really trad climb, I’ve never been on multipitch climb, neither of us ever had to jug up or set the fix ropes on big wall … The learning curve was steep 🙂 🙂 🙂”
Every few days during his stay in Yosemite, Adam Ondra has, in his unpretentious manner, reported his progress, concerns and admiration for his predecessors. On top of climbing the Dawn Wall, he climbed the best known route on El Cap, The Nose, in a day together with his father; after two falls at the Great Roof he opted to aid the pitch. He climbed all pitches onsight apart from the Changing Corner. Already before Adam knew that not only his own capabilities were crucial for the ascent of the Dawn Wall but also external conditions like weather and temps as well as the state of the skin of his fingers.
In line with Big Wall ethics, Ondra and his partner fixed all pitches and projected until Adam was able to put all the pieces together. The Team Caldwell /Jorgeson had climbed all pitches in a joint effort (for the exact sequence of who climbed what and when see here) Adam led all 32 pitches.

VITA ADAM: Since he turned 13 years old, Adam Ondra is one of the leading climbers of the world. He was able to win all the important titles in climbing competitions. Over the last few years he climbed the most difficult sport routes and boulder problems all over the world.
In November, Black Diamond Ambassador Adam Ondra admitted that he featured a big gap in his climbing career. “I’m a little ashamed that I haven’t been to Yosemite yet,” he told Black Diamond.

Over the past three years, being at university, Adam could not muster the time off in October /November, that being the best time for hard Big Wall climbing in Yosemite. In 2016 Adam completed his Bachelor in Business Management and – after the World Championship Title in September – reserved some time for legendary Big Walls and explicitly for the hardest among them, the Dawn Wall.
Adams inspiration for the Dawn Wall stems from the movie ‘Progression’ by Big UP Productions and a conversation with Brett Lowell. Adam was on fire for the style of climbing; face climbing, the sustained difficulty and its predominantly balanced and delicate climbing. For him it did not look like typical Yosemite climbing and it proved unique indeed.

Here at Black Diamond it’s all about climbing and skiing. We share the same experiences that you do on rock, ice and snow and these experiences push us to make the best gear possible for our worldwide family of climbers and skiers. What began with a backyard anvil and a hammer has grown into a global company with offices on three continents that’s not just for rock climbers, but one that stands for the spirit of the sports we live, their values and goals, past, present and future. Since 1957, our innovative gear designs have set the standards in numerous areas. This is partly the result of dedication, desire and diligence on the part of an incredible team of people. It’s also the result of each of us being climbers and skiers ourselves.