Massive granite faces up to 700 meters high, towering over deep fjords. A wild land surrounded by ocean on one side, and on the other an icecap covering more than 80% of its surface. It’s here in Greenland that mountaineer and high-mountain guide, Christophe Dumarest, has decided to share his passion for climbing with amateur alpinist, Antoine Rolle. Winner of the 2016 Julbo Vertical Session, and selected from around 40 other candidates, Antoine probably never dreamt he’d get to live such a unique experience. Here’s our account of their adventure where they aimed to open a big wall route on the little-visited Fox Jaw Cirque.

“If mystery and adventure are major motivators for a climber, it’s easy to understand the attraction of Greenland.” –  Christophe Dumarest

TWO MEN FOR ONE CHALLENGE: 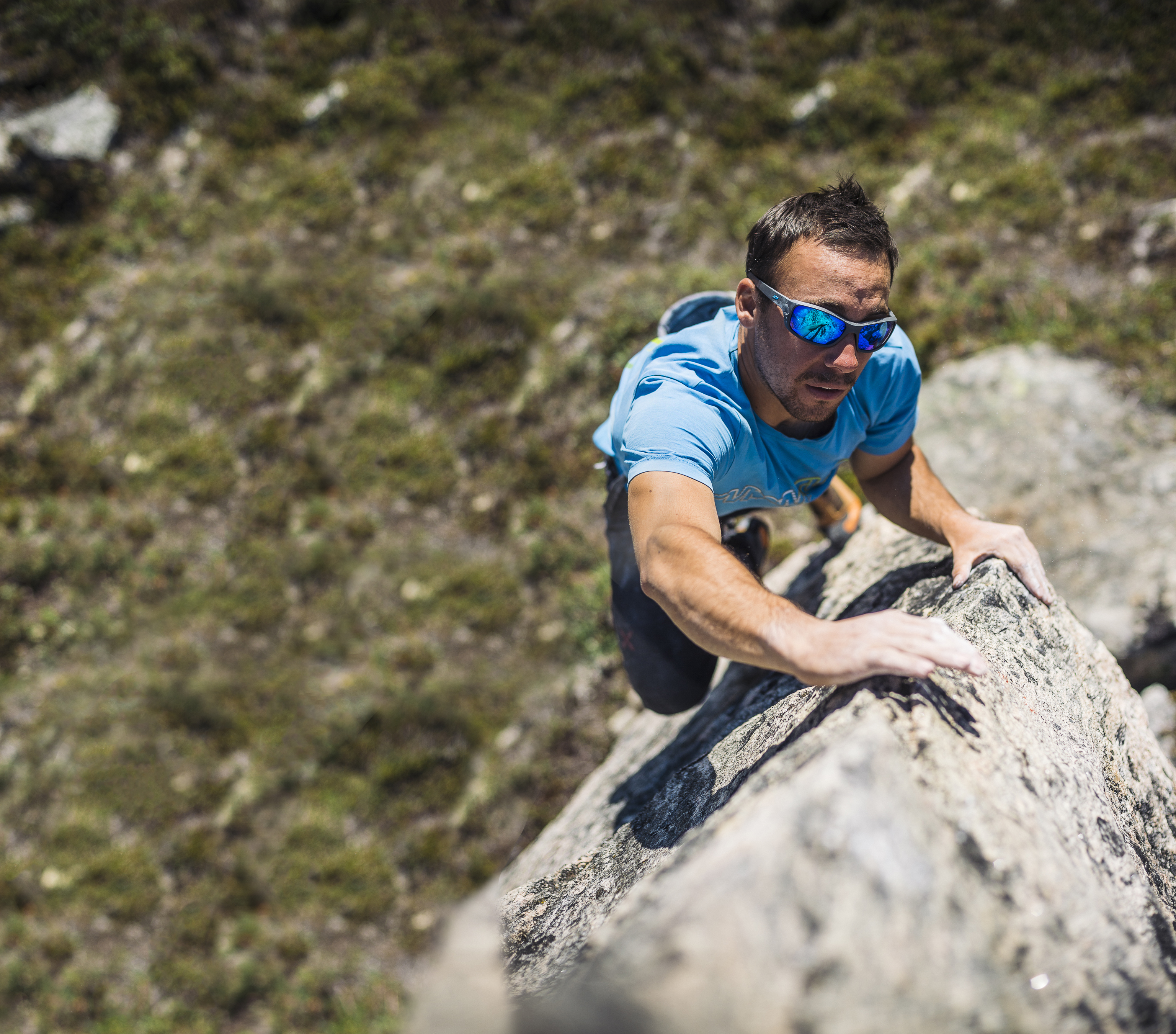 ANTOINE ROLLE, A HAPPY-GO-LUCKY AGE Living in the south of France and originally from Nice, he almost missed out on the adventure. Suffering from ill health on the two selection days, Antoine wasn’t able to show his full potential. A bit of bad luck which didn’t stop him winning the competition and setting off to the Arctic with Christophe Dumarest. A passionate mountaineer since his teens, the 25-year-old already has a fine climbing CV. Featuring expeditions to Alaska and Bolivia where he opened new climbing routes, it also includes some great ascents in the Alps, for example the Eiger, the Matterhorn and Grandes Jorasses. Since January 2015, he’s been a member of the National Mountaineering Excellence Group in France. With a master’s degree in land use planning in mountainous regions, he’s now concentrating on getting his guiding qualifications, with the aim of finding a job that could combine both these activities. 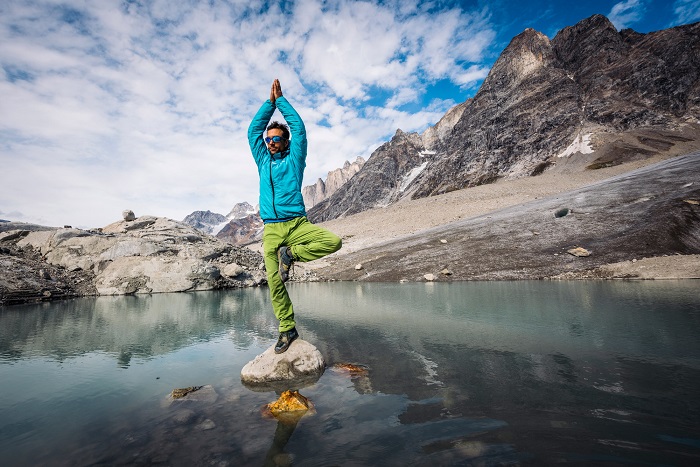 CHRISTOPHE DUMAREST, THE ROAMING MOUNTAINEER At 36 years of age, Christophe Dumarest has already crossed the surface of the planet several times to satisfy his passion for the mountains. A renowned mountaineer, he shares his time between personal projects, his role as a technical advisor for several brands and his job as a mountain guide. Born in Annecy, he started climbing when he was very young. He wasn’t yet 10 when he completed his first 4000 meter ascent. Since then, Christophe Dumarest has opened several new lines on ice, rock and mixed climbs. It’s this versatility at the highest level that makes him stand out from the crowd. When you ask Christophe what thrills him on the peaks, he talks about the art of vertical roaming: “Spending several days in the mountains, linking up summits. Doing this creates long-lasting sensations that stand the test of time.” It’s easy to see why Greenland, one of the rare places in the world where there are still routes to be opened, was such an obvious choice for him.

“Christophe’s a bit like an older brother. He’s shared his vast experience with me. I’ve learnt so much at his side in many different areas.” – Antoine Rolle

LAND AT THE END OF THE EARTH With a dirt airstrip and limited landing opportunities, arriving by plane on the tarmac of Kulusuk in the east of the country sets the tone. The newness of it all hits home before they even leave the airport. Relieved to see that their many pieces of luggage have arrived safe and sound, our two mountaineers meet Siggy.

“Catapulted into one of the remotest corners on earth, getting off the plane has never been such a shock!”

“We’re stunned by the village of Kuummiut and its brightly colored houses. How can people live in such a remote corner of the earth? Our heads are full of questions: what must it be like to live here in summer, but above all, in the endless winter?” –  Christophe Dumarest 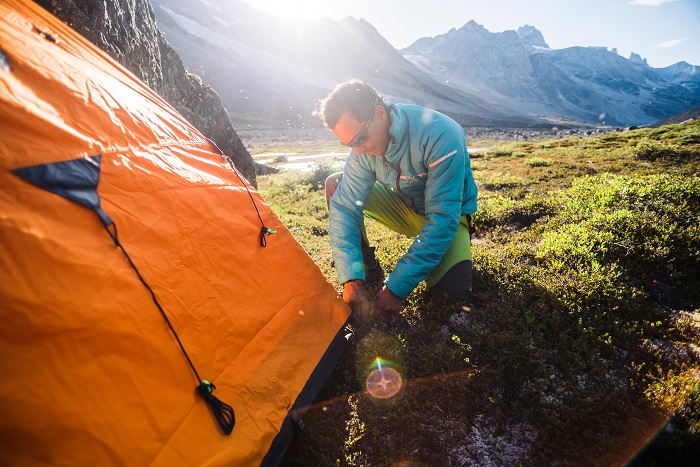 FLAVORS OF A FIRST Floating right over the Arctic Circle, from Siggy’s boat, our two accomplices can make out Fox Jaw Cirque for the first time. Seeing the dizzying faces is a moment of high emotion. Once on dry land, they need to get to base camp. Two days of walking in conditions that aren’t always easy: fording streams and rivers in glacial water of 2°C with a strong current. Their 50-kilo bags, loaded with gear for three weeks of independent living, start to weigh heavily. They can’t afford to lose their balance for an instant. As well as their mountaineering, climbing and camping gear, they also carry a .355 Magnum. Bears in the neighborhood make this a necessity, and the large-bore rifle slung over a shoulder acts as protection.

“Blown away by the vast, unspoiled landscape, we head to Fox Jaw Cirque like iron filings drawn to a magnet!” – Christophe Dumarest

After months of preparation and hours of walking, they finally reach what they’ve been looking for: a bucolic setting streaked with rivers and patches of flowers, and overhung with immense walls of granite, is laid out before the two adventurers who decide to set up base camp here, the only trace of life in these remote lands. Once they’ve settled in, their eyes take in both the surrounding boulder fields and the huge faces towering above them. They don’t know which way to turn, delighted to see that the massif has lived up to all its promise.

The need to identify the ideal line quickly becomes a priority. They spend a whole day tracing a logical route on the right part of the molar, the second tooth in the chain. At the foot of the wall, they have their doubts. They’ll only be overcome once they’re at the top. On the second pitch, there’s a massive let-down. They find webbing on a ledge: this route has already been climbed. Once they get over the disappointment, Antoine and Christophe check out the dihedral looming above them like a big open book. Hope springs once more when they realize that the previous group of climbers gave up at that point. Without a real crack, the dihedral looks impassable. But Christophe launches himself into the crux. This key passage, above two friends wedged into an unstable flake that could move at any time, is one of the most exposed on a route lying somewhere between 6b and 7b. Finally, after much effort, Christophe gets through. He anchors the belay 50 meters higher before shouting out in delight. Six pitches later, totally spent by the commitment required at each stage and frozen by the glacial wind, they leave the last pitch for another day. 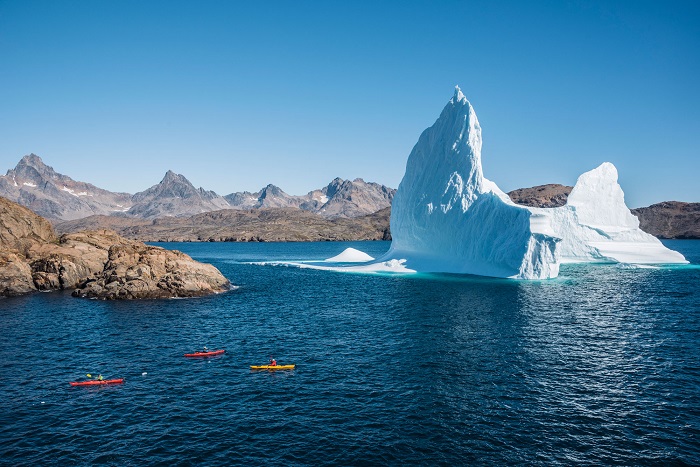 After a rest day, and by now used to the cold, Antoine and Christophe restart the ascent. They link the pitches feeling more relaxed than on the first attempt. Antoine takes on the final technical part of their granite route. At the top, the 360° view is stunning, lying at the crossroads between three worlds: earth, sea and ice. The route has been opened, and their mission accomplished. A unique and timeless moment savored by our climbing duo.

“‘Nothing great was ever achieved without enthusiasm,’ said Emerson. That’s just as well, because enthusiasm is one thing we have plenty of!” -Christophe Dumarest

The weather has been kind. A route has been opened and doubts about the elements have been laid to rest. A slice of luck and relief all round, given that the vagaries of the weather are a major cause of uncertainty in the far North. Protected by their lucky star, it turns out that the sun fails to appear on very few days. And when conditions worsen because of the wind, forcing them to take a rest day, the two climbers use the time to check out the superb boulder field discovered a stone’s throw from base camp.

“Finding a new route is a privilege at the same time as a real responsibility. It’s only by putting our hands and our guts into it that we’ll know if it works, if we’re up to it.” – Christophe Dumarest

Immersed in a world far removed from their daily lives, our duo enjoy trying out some local customs. Taking to kayaks, they explore the enchanting icebergs scattered in the sea. This ephemeral, openair museum puts on a magnificent show. The adventure is already coming to an end. Cradled and enchanted by endless days of unreal light, the two men start to wonder: “And what if all of this turned out to be just a dream?”

“It will take a long time for the light and the visions of Greenland to fade, and their effects may even be permanent.” – Christophe Dumarest 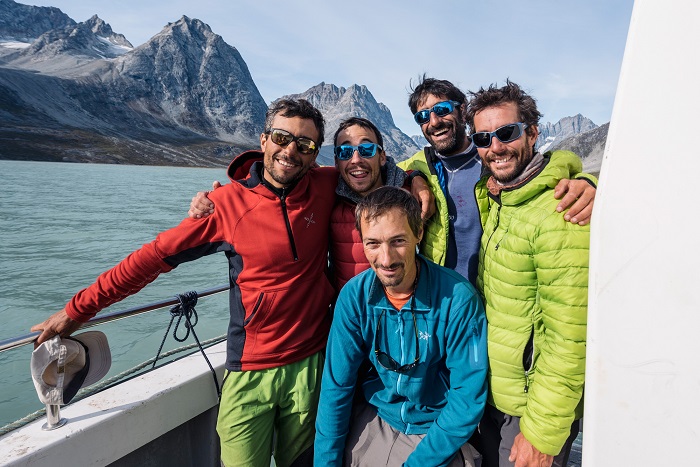 Protection at its highest

From mountain to valley

A great classic for mountain lovers on familiar terms with the peaks… but who also return to the valley! Ideal for medium to large faces, the removable protective side shields offer perfect adaptability to climatic conditions. Lightness, technical excellence and high protection are combined with style and simplicity on this model.
> Read more

Passport to the mountains

Designed for novice climbers or hikers, with this wraparound, robust model you can tackle the highest mountains with complete protection, without worrying about glare. With their integrated side-shields, polypropylene construction and superior comfort, these glacier sunglasses will also delight the most experienced climbers as emergency sunglasses slipped into the backpack.
> Read More

Founded in 1888 and based in the Jura (France), Julbo is a benchmark sports eyewear brand. Famous for its technical expertise, Julbo is following its own values and creative drive to become a global sunglasses and eyewear player. Julbo’s mission: finding the best solutions to protect our eyes and allowing all of us to see the world better. www.julbo.com