The EDELRID Ohm is an innovative, new solution for the problems experienced by climbing partners with a significant difference in weight. That is to say the risk for a heavier lead climber if their partner has difficulty controlling their falls and the risk for a lighter belayer if their partner’s falls pull them off the ground, hurling them against the wall. The OHM is an assisted-braking resistor that you install at the first bolt in the safety chain. In the event of a fall, the OHM increases rope friction so that a lighter belayer can hold a heavier partner without being suddenly pulled off the ground and thrown against the wall. The OHM still ena-bles smooth paying out and taking in rope when climbing and belaying and has no negative affect on handling. The OHM was developed for use at both climbing walls and outdoor sport climbing venues. 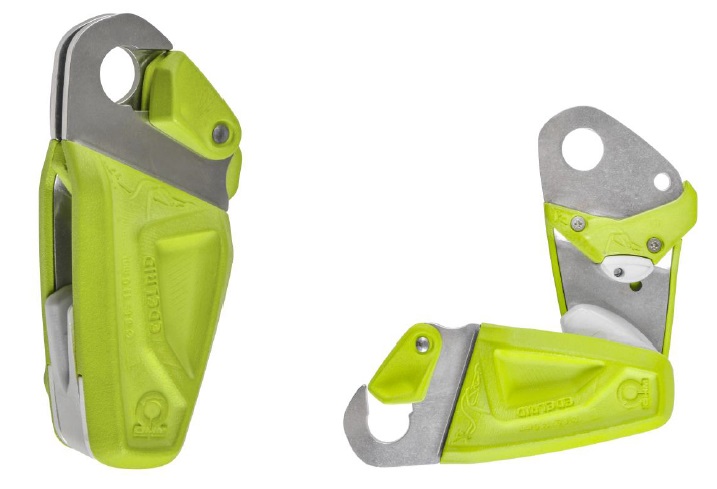 The problem: climbing partners with a significant difference in weight
If there is a significant difference in weight between lead climber and belayer this fre-quently causes problems. This applies in particular to climbing couples, where the woman is often significantly lighter than her partner.
In the event of a fall, a lighter belayer can be suddenly pulled off the ground and hurled against the wall. In addition, when a belayer is pulled high off the ground, this signifi-cantly increases the distance that the climber falls. If the climber is still near the ground, belayer and climber might collide. In the worst-case scenario, the climber might hit the ground.

Using a weight bag to reduce the difference in weight is not possible all the time (no-body wants to carry a weight bag to the crag). In addition, weight bags restrict a be-layer’s freedom of movement. And even when using a weight bag, the belayer still has to supply the full braking force (with the associated risk of friction burns as the rope runs through belay device).

The solution: the Ohm – assisted-braking resistance to increase rope friction
The development of the Ohm was supported by the Institute of Mechanical Handling and Logistics at the University of Stuttgart. It is an assisted-braking resistor that is at-tached at the first bolt with a quickdraw and the rope runs through it. In the event of a fall, the rope is pulled into the device’s braking mechanism. This then brakes the fall.The device does not stop the rope abruptly; instead it progressively brakes the speed it runs through, so that the belayer can still dynamically arrest the fall. The Ohm in-creases the amount of friction in the safety chain, independent of the belay device used. As a result, the belayer needs to apply significantly less hand braking force to the braking rope to arrest the fall and they wont be hurled against the wall in an uncon-trolled manner.

The Ohm is designed not to affect rope handling when belaying a lead climber. It nei-ther increases rope drag for the lead climber, nor has a negative affect when paying out rope. The device’s assisted braking mechanism is only activated in the event of a fall.

The OHM benefits both climber and belayer:
The belayer wont be pulled against the wall in an uncontrolled manner. The climber can climb right to their limits, without having to worry that their belayer might not be able to hold them should they fall and with no fear of a hard landing.

The German and Swiss Alpine Clubs (DAV1, SAC2) recommend that a climber should not weigh more than 1.33 times their belayer, i.e. maximum one third more (for exam-ple: belayer 60 kg/climber maximum weight 80 kg). In the event of a big fall, in particular at the climbing wall, such large differences in weight require extreme care and attention on the part of the belayer.

Including the Ohm into the safety chain increases this factor significantly.
With this device, it is now possible for climbers in the lower weight ranges to belay a lead climber, who is up to 100% heavier than the belayer. The Ohm is suitable for ropes with a diameter between 8.6 and 11 mm and is particularly beneficial for belayers with a body weighing upwards of 40 kg.

Integrating the OHM into the safety chain
The lead climber ties in to the “sharp end” of the rope. They place the rope in the OHM (see fig.1) and then attach it to their harness with a quickdraw. At the first bolt, they attach the quickdraw with the prepared OHM to the bolt. The leader and belayer then climb as usual. On the way back down, it’s important to remember to remove the de-vice. Should lighter climbers fall with an assisted-braking resistance OHM in place, then the fall would be much harder.

The OHM is intended to be used at climbing walls and outdoor sporting climbing ven-ues. Its main target groups are climbing wall operators, climbing centres, climbing clubs and climbing partners with a significant difference in weight.