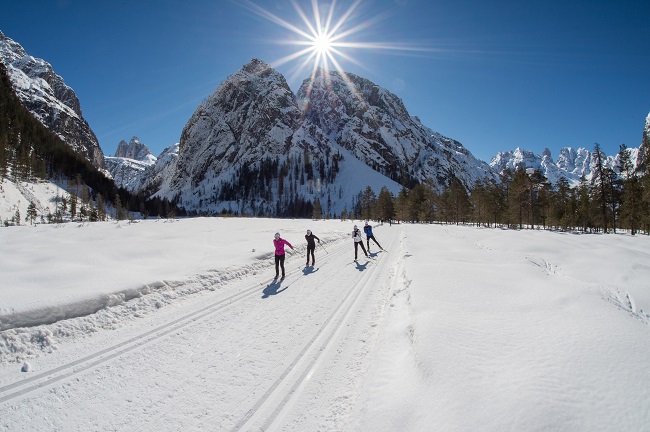 South Tyrol’s Alta Pusteria/Hochpustertal, which as of recently presents itself under the “Three Peaks Dolomites” brand, offers some of the best places for a winter season filled with outdoor action, opportunities to relax and romantic moments – in the picturesque townships of Sesto/Sexten, San Candido/Innichen, Dobbiaco/Toblach, Villabassa/Niederdorf and Braies/Prags. Whether it is a horse sleigh ride in the Val Fiscalina/Fischleintal, a walk along the shores of Lago di Braies/Pragser Wildsee, a stroll through San Candido’s picturesque pedestrian zone, a stop at Klammbachalm or snowshoeing and cross-country skiing through a mountain winter wonderland: the wide variety of choices is sure to suit all tastes.

Romantic moments in the snow
What could possibly be more romantic than a horse sleigh ride for two through the picture-perfect snow-covered scenery at Val Fiscalina and the famous Meridiana di Sesto?
Or how about a walk through the charming pedestrian zone of San Candido, site of the annual “Dolomite Christmas”? This season, the event takes place November 25 through January 6, filling the village with true Christmas magic. Nature lovers, on the other hand, should opt for Lago di Braies, the largest natural lake in the Dolomites, which during the winter months is covered with glittering white ice and snow.

An athlete’s dream come true …
Winter time is also the perfect time to enjoy the great outdoors – on cross-country skis, for example. The holiday region Three Peaks in the Dolomites features an impressive 200 kilometer network of groomed and connected trails. An insider’s tip is the Val di Landro tour providing great views of the Three Peaks.
Alpine skiers will enjoy the area’s more than 93 kilometers of perfectly groomed slopes in the Three Peaks Dolomites ski resort, snow guaranteed. And, next to the new, sun-drenched Three Peaks run actually lies Italy’s steepest run, the so-called “Holzriese”.

Unspoiled landscapes and a hearty snack
Snowshoeing puts participants into a slower, almost meditative mode when jointly making their way through spectacular landscapes covered with an immaculate white blanket of snow that produces softly crunching noises. Offering breathtaking views of the Three Peaks, a hike from Prato Piazza/Plätzwiese to Monte Specie/Strudelkopf is considered to be a true highlight. At the end of an extensive hike or snowshoeing tour stands a hearty snack, served in the cozy atmosphere of a farmed alp like Klammbachalm. Those looking for an easier way up to the alp should instead take a gondola ride via Stiergarten.

Further information and bookings are available online at www.drei-zinnen.info