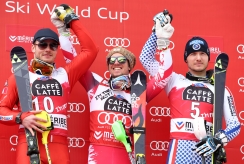 The 2014/15 Alpine World Cup season came to an end on Sunday with victories for Anna Fenninger and Marcel Hirscher in the concluding races at the finals in Méribel in France. Second and third places in the men’s Slalom went to Fischer: Giuliano Razzoli (ITA) came second ahead of Aleksandr Khoroshilov (RUS). As a result there were three victories and 19 podium finishes for the Fischer Race Family to celebrate in 69 races in total.

The racers who made it to the very top of the podium were Nicole Hosp (AUT) in the women’s Slalom in Aspen, super glider Steven Nyman in the Downhill classic in Gröden and Slalom breakout star Aleksandr Khoroshilov with his triumphant performance in the Night Race in Schladming.

Tyrolean racer Hosp, who has been part of the Fischer Race Family since 2011, picked up big points on a regular basis also throughout this ski winter with her elegant and sensitive skiing style which was underlined by her fifth place in the overall World Cup standings at the end. Besides her Slalom victory in Aspen, the silver medallist in the Combined at the World Championships in Beaver Creek managed two further World Cup podiums (third in the Super G in St. Moritz and third in the Downhill in Méribel) plus twelve top-10 places overall. 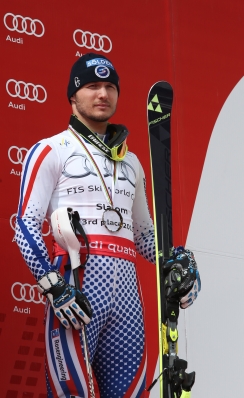 Khoroshilov, a long-standing member of the Fischer Race Family (since 2006), established himself among the world’s top-class skiers this winter. The 31-year-old Russian finished in the top 10 in all ten Slalom races of the season. The most notable results are his third places in Åre and Méribel, which also secured his third place in the overall SL World Cup ranking, plus his spectacular victory in front of 40,000 spectators in Schladming. These results made Khoroshilov stand out in Fischer’s very strong men’s Slalom team which also featured (among others) world champion Jean-Baptiste Grange, Olympic gold medallist Giuliano Razzoli (second in Kranjska Gora and Méribel) and Swiss shooting star Daniel Yule. An impressive seven Fischer Slalom aces qualified for the World Cup finals in Méribel.The third name on the list of race winners was Fischer stalwart (since 2002) and Gröden specialist Steven Nyman. The US speed racer can rightly be referred to as a Gröden specialist, having won all of his three World Cup victories on the Saslong Downhill course. Nyman, who finished fourth in the WSC, earned another podium finish (3rd) in the World Cup Downhill in Beaver Creek and additional top places in Méribel (4th) and Kitzbühel (5th) to leave him in sixth place in the overall Downhill ranking. As Fischer’s second speed specialist, young Upper Austrian Vincent Kriechmayr drew attention to himself with some very promising results. The racer from Linz likewise made it to the podium with a second place in the Super G in Kvitfjell and had four top 10 finishes in total.The term “world class” also applies to Czech racer Šárka Strachová. The WSC bronze medallist in Slalom in Beaver Creek rounded off a strong World Cup season with podium finishes in Kühtai (2nd), Maribor (3rd) and Åre (3rd). Thanks to her consistent performances the 30-year-old former world champion ended the season in a good fourth place overall in the Slalom World Cup.

Giant Slalom specialist Thomas Fanara contributed three third places (in Alta Badia, Kranjska Gora and Méribel) to Fischer’s results and the French skier finished fifth overall in the discipline ranking. Italy’s Daniela Merighetti (third in the Downhill in Cortina) and Croatia’s long-standing winning racer Ivica Kostelić , who finished third in the Combined in Wengen, both made it to the podium, too.