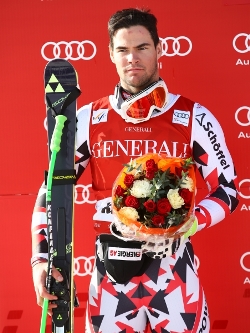 Vincent Kriechmayr and his ski sponsor Fischer Sports will remain a team for the next three years. “The contract has been signed and we are delighted about the continued partnership. We were convinced from the beginning that Vince has great potential and this is also what he has shown us this year,” says racing manager Siegfried Voglreiter.
One season ago people were still referring to him as a young hopeful and his goal was to make it into the top 30 of the World Cup rankings in at least one discipline. He currently has four top-ten finishes including one podium in the 14l15 season to his name. With 24th place in the overall World Cup, 21st in DH and 6th in SG, he has not only achieved his goals, he has exceeded them by far.Having said that, the 23-year-old Upper Austrian remains modest: “Health has top priority, then followed hopefully by success. My family and my home are important to me. I’m very attached to where I come from, I love the farm I grew up on and know exactly how much my parents and brother and sister have done for me. I’m very happy about extending the contract with Fischer. As an Upper Austrian I am proud to be able to ski with Upper Austrian skis. Fischer gave me a great deal of support when I was young and made many things much easier for me as a result. Fischer was my first sponsor and I am happy to be part of the Fischer family, both now and in the future” says Vincent Kriechmayr.
INFO: Fischer Sports