A love for the mountains spanning three generations and a company owner that spends his free time conquering the most evocative mountain peaks. To celebrate 85 years of fine boot making and innovation in outdoor equipment, Marco Zamberlan and a team comprising the mountaineers Caio Pellizzari, Stelvio Frigo, Michele Barbiero, Vlad Moroz and Vasily Voloshin reached the summit of Ama Dablam (6814 metres), one of the most fascinating mountains of the Himalaya mountain range. It was the love for the mountains, the nearby Small Dolomites, that encouraged the grandfather Giuseppe Zamberlan to set up a production of handcrafted hiking and climbing boots in 1929. Today, Zamberlan exports over 90% of its production to more than 50 countries worldwide, while the family continues to follow personally all the steps of the production process – from design and manufacturing to distribution and of course, testing. 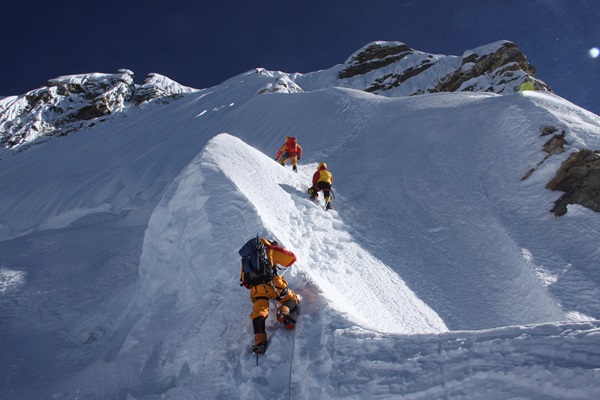 We met up with Marco Zamberlan on his return from the expedition to Nepal.

1) Hello Marco, congratulations on the success of the expedition to Ama Dablam. So, how did it go?

The expedition went really well as we all had a great time and no serious problems occurred. It was an experience that enriched our hearts and minds. We will repeat it for sure. Though Nepal has changed a lot in the recent years due to the influx of tourists and development of local business, I think that it’s still one of the most beautiful places on earth for a mountaineer because of its mountains, the views and the natives.

We started the climb up Ama Dablam from the base camp where there were a lot of people but we had arrived there trekking through one of the lateral valleys away from the Khumbu Valley (that’s the main one going to the Everest Base Camp) in order to avoid the caravans and large tourist groups. The decision to take the quieter route was not so much about exploration but rather about being by ourselves, considering the long friendship that binds us.

2) 4 Italians and 2 Russians. How did you choose the team members?

Friendship plays a fundamental role. On this sort of adventure there is a kind of brotherhood that forms and helps you to share the best moments and to face the tough ones. For Zamberlan’s 85th anniversary we opened up the invitation to mountaineers from other countries. Our Russian friends Vlad Moroz and Vasily Voloshin from the RedFox Outdoor Equipment Team were the first to sign up, but unfortunately other Japanese friends had to pull out at the last minute. From an organizational point of view, it doesn’t really make much difference how many team members there are because each person must be perfectly capable of working autonomously and be able to deal with each phase of the climb.

3) Why did you choose this mountain for the 85th celebratory climb? Were there any substantial differences to the previous two expeditions?

Ama Dablam is one of the most beautiful mountains of the Himalayas and, even though it’s not an eight-thousander, it does have some zones that from a technical point of view can be more complicated and require particular preparation. For such an important event as our 85th anniversary in the world of outdoor footwear, we thought that the supreme beauty of the mountain and the technical profile of the challenge made Ama Dablam the right goal for us. Compared to the last two expeditions, it did turn out to be more difficult. For example, we climbed the 7000m Aconcagua using a normal route without any major technical difficulties. The only problem, if any, was the cold weather.

4) As far as the temperatures are concerned, how was the situation on Ama Dablam?

The temperatures weren’t extreme, at night it went down to about -17°C to -20°C. There is a wide temperature swing: during the day when the sun is up the warmest hours are from 9am to 4pm. At midday, for example, it gets really warm, which increases the threat of avalanches.

5) Ama Dablam means “Mother’s necklace”, due to the long ridges on either side of the mountain that are said to look like the arms of a mother protecting her child. Was it that much reassuring to be up there on the top? Or did you feel some kind of discomfort or even fear?

Well, it wasn’t reassuring at all! On the contrary, I must say that it’s quite frightening, considering the mountain’s structure and the difficulty of the climb. Ama Dablam is one of the most spectacular mountains in the Himalayan range. Its shape is similar to a pyramid, just like the Italian Cervino mountain, only much higher and larger. It has some very sharp ridges and the way up lies exactly on one of them. I must admit that, seen from the bottom, it looks really frightening, as well as from the top; especially when you are at the higher camps, you feel somehow intimidated. These are all reasons though that make it one of the most visited and inspiring mountain peaks in the world.

We didn’t experience any serious discomfort though. Our biggest worry was the presence of climbers above us and the risk of pieces of rock and rubble coming down. And then there was the problem with the fixed ropes: they were in bad shape in the lower parts of the mountain and practically didn’t exist higher up. Nobody had climbed the mountain from the Camp 2 up to the peak, so we had to rig it ourselves, something that gets usually done by the locals, not by the foreigners like us. Unfortunately, a few days before our expedition, a 42 year-old French mountaineer died on the same climb. A fixed rope came off and the poor man fell to his death. As far as our expedition is concerned, we were quite lucky. One of our guides dislocated his shoulder and one of the Russian members hurt his ankle in a fall, but apart from that it all went really well.

6) Let’s talk about equipment. How do you choose your equipment and what did you take with you?

The choice of equipment is based on the technical difficulty of the climb, the height of the mountain and therefore the temperatures one is going to face. As for the boots, we had a new product that we wanted to test personally. The whole team was equipped with Zamberlan’s new Karka model, a high altitude boot that is cramponable and has a removable inside shoe. The boots were really comfortable, warm and performed well. We all appreciated them while one or two of us even thought they were too warm (it is anyway a plus and this opinion could have been conditioned by the high daily temperatures). Just like in case of the 6000 Karka RR model, all the information gathered from the climbers is useful for improving the production in the future. Starting from the base camp, we always ask other mountaineers for feedback and take that precious information regarding everything, from the thermal insulation to fitting and comfort, back to our technical office. As you can imagine, the feet are at the highest risk of freezing because they’re almost constantly in the snow. 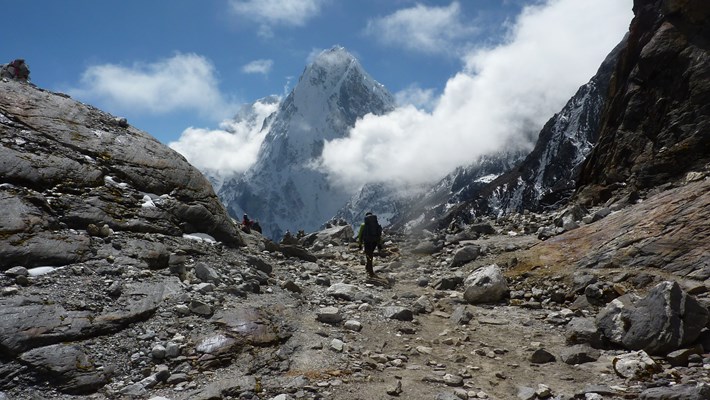 7) What about the rest of the equipment?

Good gloves for high altitudes are a must as well as a thermal suit that is comfortable and lightweight. Getting frozen is the main danger so a suit must allow the freedom of movement and also be suitable for the night because you keep it on when you go to sleep.

8) What are the most important aspects of the physical preparation for a mountaineer facing a 6800m climb?

Physical preparation is essential on a challenge like this. One of the fundamental aspects is the acclimatisation and the ability to slowly adapt your body to the altitude. If you’re in Nepal at high altitudes your body has to acclimatise step by step without enforcement. Usually you make a climb and then return to a lower position to sleep in order to ensure a gradual adaptation to the temperature and to avoid the “mountain sickness” where risks include pulmonary or cerebral edema. It’s very important to stay hydrated, eat properly and take in mineral salts. We did most of our preparation directly on Ama Dablam by trekking up to 5300m, or up to the Labouche Peak, which is 6100m.

9) What about the final outcome? Did you meet the goals you set yourselves: the summit at 6.814m and the timeframe of around 20 days? Was the weather good to you?

The weather was good to us, yes, apart from three days of bad weather which kept us confined to our tents. There were two avalanches, but luckily for us they weren’t in our direct path. Like I’ve already said, I think the worst and the most unexpected thing was the missing fixed ropes high up and the worn out and unsafe ones in the lower parts.

10) Just a few curious questions … Where did you get the food? How did you sleep at night? The light and the sound, do they feel different?

Until we got to the base camp we had a Nepalese cook who alternated between meat, rice, eggs and soups. At the higher camps we cooked the food ourselves and we mainly used freeze-dried soups that we brought with us. In general we all slept quite well at night, except for a few sleepless nights because of the cold. There aren’t any particular sounds or noises, apart from the wind, but you obviously set up your tents in the most protected areas. The nights with the full moon were particularly beautiful with all the light getting reflected from the snow and creating, together with the starry sky, a really suggestive and fascinating landscape.

11) You are a mountain man, but also a business man. How do you balance the two?

I’d like to have more balance in the sense that it would be lovely to dedicate more time to experiences and adventures that fill your heart and soul, just like the recent trip to Nepal. That’s the kind of expedition that we do every five years or so. Anyway, I have great coworkers in my company, so I manage to take a little time for myself now and again.

12) Your next projects, climbs, ventures?

We might go to Pakistan where the landscape is similar to that of the Himalayas, with very high mountains. Or in Patagonia, where the summits reach around 4000m, but are quite technical with a lot more climbing involved. We’ll keep you updated… I hope soon!

Zamberlan takes an artisan approach to every product. We imagine it, we think about it, we study it, we try it and then we produce it. We take particular care because each product is made by our own hands in our company in Pievebelvicino where we can easily and quickly wear the product on our own feet to try it out in the Dolomites. www.zamberlan.com