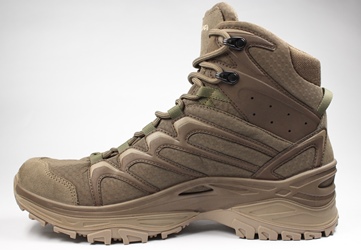 The LOWA  Innox GTX® MID proved to be the winner of the comparative test done by the magazine „Alpin“ to be issued in June 2015, in the multifunctional footwear category.

The testers expressed very positive opinions on the adaptability of the upper to the foot, on the softness of the collar, on the easy lacing; also the sole had positive acknowledgements for its flexibility and safe foot support. The boot obtained the best score for fitting, rolling and quality in the manufacturing.

”In the end a very balanced project, that responds in a perfect way to the requests of a light multifunctional shoe” : this is the final verdict of the “Alpin” magazine on the LOWA Innox GTX® MID.

This award represents the successful achievement of a model which has been in the LOWA Outdoor collection for years, updated this year in the colors and presented during the Shot Show in Las Vegas and IWA of Norimberga.

Also the customers in this trade show welcomed this new proposal with widespread curiosity and enthusiasm.