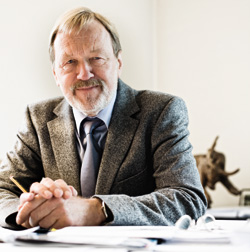 On 11 July, Albrecht von Dewitz, VAUDE founder and EDELRID CEO, was honored with a special award: OutDoor Celebrity of the Year 2013. For the eighth time, Messe Friedrichshafen honored a personality who has made a special contribution to the outdoor industry during the OutDoor 2013, a specialized European tradeshow for the outdoor industry.

Visibly surprised, Albrecht von Dewitz accepted the award from the hands of Bernd Kullmann, CEO of Schwan-Stabilo Outdoor. “Normally, individuals who win this award have already retired…”, joked Albrecht von Dewitz, who doesn’t want to hear anything about that yet. “I am really very pleased with this wonderful honor – you totally caught me off guard.” Bernd Kullmann, former managing director of the backpack brand Deuter and longtime competitor and companion of Albrecht von Dewitz, gave a rousing speech full of cheerful anecdotes and personal recollections. “He is exactly like his handshake – strong, straightforward, no-nonsense. Albrecht von Dewitz is an institution in the outdoor industry, a dyed-in-the-wool entrepreneur, spirited, innovative, eternally restless, demanding – a real outdoorsman by absolute conviction.” said Bernd Kullmann.

Albrecht von Dewitz grew up as one of seven children in the Luneburg Heath in northern Germany. After completing an apprenticeship as an export merchant in Bremen, he studied business administration in Wilhelmshaven. As the head of the export department in a sporting goods company, Dewitz gathered his first professional experience before he took over as the managing director of a sports gear manufacturing company on Lake Constance. In 1974, the mountaineering enthusiast made his hobby his career and, without investing any capital of his own, founded VAUDE in the nearby town of Tettnang. VAUDE started with climbing hardware and its own backpack collection. Later, functional clothing, sleeping bags, tents and shoes were added as well as the market division Bike

Sports and Packs ‘n Bags. The climbing and mountain sports company EDELRID with its headquarters in Isny/Germany has been a part of the VAUDE brand alliance since 2006.
Today, VAUDE is one of Europe’s market leaders in the outdoor industry and an internationally active company. As its founder, Albrecht von Dewitz has had a major impact on the medium-sized family-owned company. VAUDE stands for responsibility, stability and reliability, both in relation to its partners and employees as well as in relation to the environment. He has guided the company’s ecological and sustainable direction. In 1994, for example, VAUDE set up its own recycling network and in 2001 it was the first sporting goods manufacturer to adopt the stringent Bluesign textile standard. In addition, VAUDE was the first European outdoor company to be certified by EMAS and ISO 14001 for its environmental management system.

Albrecht von Dewitz has not only had a major impact on his own company, he’s also influenced the entire outdoor industry with his innovative product development and visionary thinking. Whenever he was won over by an idea, he fought for it and wasn’t afraid to experiment in new ways – whether it concerned innovative technologies or environmental and social commitment. Thus he was significantly involved in bringing what is now the most important tradeshow in the outdoor industry to Friedrichshafen.
In 2009, Albrecht von Dewitz handed over the company management to his daughter Antje von Dewitz. He continues to be an active executive director of the climbing brand EDELRID, which has grown into a successful brand with continual growth in sales under his leadership.
Albrecht von Dewitz was selected for this honor by an internationally leading group of trade journals and industry representatives: Markus Bötsch (Jack Wolfskin GmbH & Co KGAa, Germany), Jürg Buschor (Outdoor Guide Magazine, Switzerland), Klaus Haselböck (Land der Berge Magazin, Austria), Therese Iknoian (ADVENTURE NETWORK®/ ThereseTranslates, USA), John Jansen (keen EMEA, Netherlands), Bernd Kullmann (Deuter Sport GmbH & Co. KG, Germany) and David Udberg (European Outdoor Group, Switzerland).

What the jury had to say
“As a first-class entrepreneur, Albrecht von Dewitz and his company VAUDE lead by example in the outdoor world, promoting responsible growth as being the best way forward to develop a great company of the future. I have a lot of respect and admiration for their success in balancing their environmentally friendly approach with commercial business success. A key reason for their success is the fact that this has been part of their DNA from the very beginning when Albrecht founded the company.” John Jansen (keen EMEA, Netherlands)
Albrecht has been one of the cornerstone people of the modern outdoor era in Europe. He founded his business in the 1970s when the outdoor industry was rapidly establishing itself and has grown and developed it ever since. He has led innovations in several areas for products that Vaude has developed and has also taken over and developed other brands within the Vaude stable. He was a founder of the move to what has become the modern OutDoor Show and was an important member of the EOG Board throughout recent years. He built his own factory in Vietnam and has been at the forefront in matters of quality and sustainability across the industry. Finally, he has built and prepared a strong succession management team to follow on after him.” David Udberg (European Outdoor Group (EOG), Switzerland).

The VAUDE brand stands for respect in all its interaction with others and with nature. This family-run business based in Tettnang has set its sights on becoming Europe’s most sustainable outdoor brand by the year 2015, so that sportsmen and women of today and those to come can enjoy nature to the fullest. We have been working with the strict environmental bluesign® standard since 2001, which monitors the entire textile manufacturing chain. We were also the first Outdoor company to receive EMAS certification. The VAUDE Green Shape guarantee denotes our products that are especially environmentally friendly and resource-conserving. VAUDE is on the way to gradually transitioning to environmentally-friendly manufacturing for its entire product range. Since 2012, the company headquarters in Tettnang and all products manufactured there have been climate neutral.
more