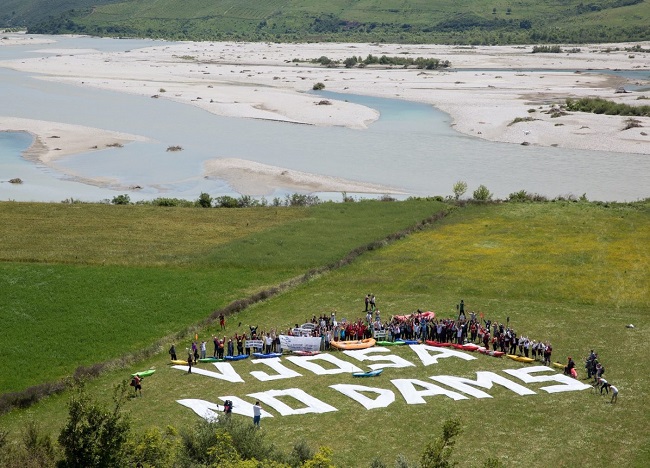 Patagonia Europe has been supporting the Save the Blue Heart of Europe campaign through grants and communication efforts over the past year. The first story introduced you to the rivers of the Balkan Peninsula and the absurd number of dam projects (2,700+) threatening them. Then Patagonia shared a report from the Vjosa River where activists did a 35-day float to raise public awareness about this important issue. The trip culminated with a protest on the doorstep of the Albanian Prime Minister. Today, we’ll venture high above the rivers of Albania with a team of Patagonia climbers who are seeking to bring a different perspective to the campaign. We’ve been inspired by the people, natural beauty and incredible recreation opportunities of this region and will continue to speak out against the harmful dam projects that would ruin it.

7 climbers, photographers, adventures, joined forces to explore and carry stories back to eyes and ears, in hopes of raising awareness of the wild rivers of the Balkans. These stories, were compiled in less than a month, by less than 10 people. Imagine the possibility of all that will be lost. 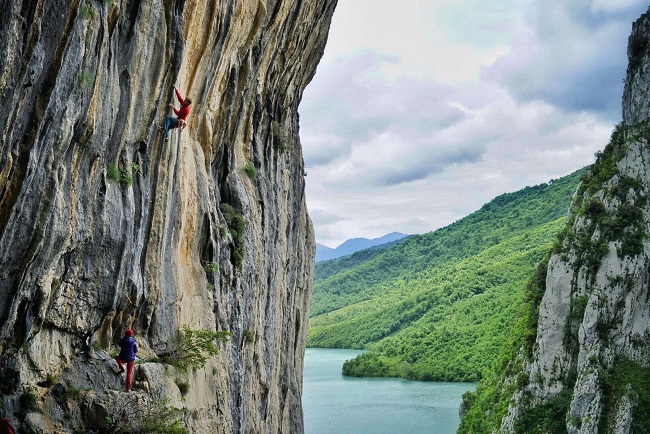 It felt like going back in time crossing the boarders of Croatia, and then later Serbia, Macedonia and finally Albania. The pace of locals was slower and slower, everyday “problems” of Western minded people became less frequent, living in the moment more obvious. Luka Krajnc

In a land I knew nothing about one year ago, lay rivers, mountains, landscapes and country sides, pristine and unexplored. We slow down and look around, taking time to see our impact before it’s too late. We embark upon a journey to discover the wild landscapes of the ‘Blue Heart of Europe’ hoping to bring eyes and ears to the mission to Save the Blue Heart of Europe across the Balkans. Stop the development of 2700 dams, preserve the Wild Wild West of Europe. 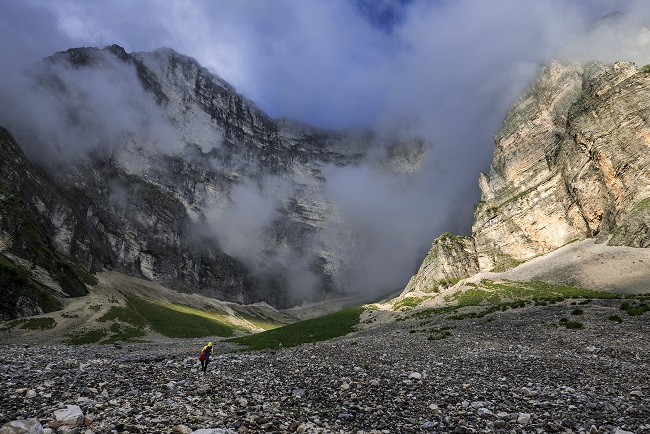 In Carchove the atmosphere is peaceful. People are working with old scythes in fields full of wild flowers. It’s difficult to think that the beautiful orange limestone crag above is virgin. No one has ever climbed here! Arnaud Petit and Stephanie Bodet

The damming of the Vjosa River would flood endless valleys and villages stealing forever possibilities of developing climbing areas, floating down river rapids, swinging fly rods, linking up rugged trails. It would bring money and power, but to who, and at what cost?

Arnaud, Steph, and Nastja establish a new route, Fields of Joy (8a+), a test piece instantly attracting other climbers. In a world shrinking with globalization, adventurers salivate over the potential to explore new, wild, landscape, people will come. 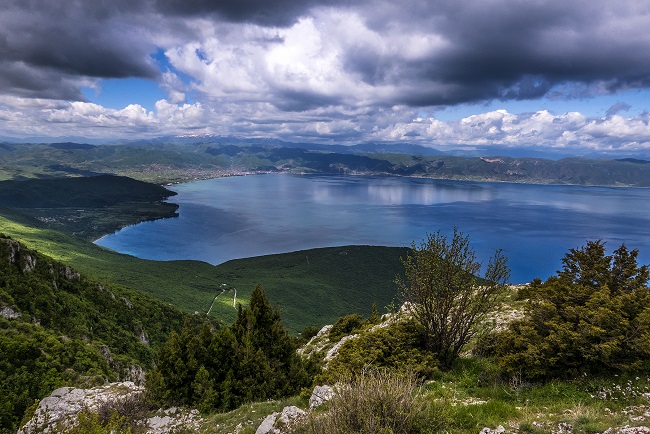 We met Kosta, an old man with a wise and quiet face, who spent the whole day with us, and invited us to his home. Fotini, his wife, boiled us water for a shower. We didn’t know these people the day before, we couldn’t even communicate, yet they welcome us as their children, offered a wonderful dinner of fresh, organic food from their small garden. Strawberries, divine lettuce, olives, fresh sheep milk, homemade nettle bread, amazing cake. I am amazed by their simple and pure life, with little impact, but a big one on me. Arnaud Petit and Stephanie Bodet

Afterwards, Kosta joins the team, drilling the first bolt of the second new line (6c) a more accessible grade, hoping to entice more climbers to explore the region. Emotions run deep from the connections discovered, something hard come by in the busy lives if the Western world. 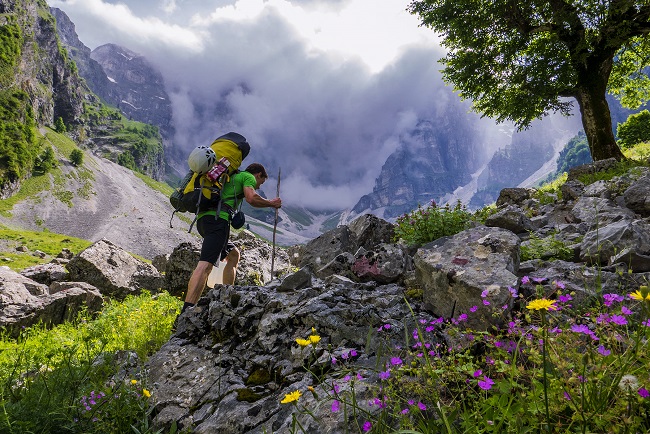 …steepening terrain that we both agreed was the worst rock either of us had climbed in our lives. Rock pitches turned into steep grass, tackled with the one ice axe we brought just in case. The seriousness of the climbing was taxing for our heads and we were pleased to see the top of the wall getting closer. Luka Krajnc

Topping out on a precarious snow cornice in approach shoes and one ice axe, Marko and Luka are relieved to make it back to the base of the wall. Isolated and committed, not a classic climb to be repeated, though satiating a thirst for unknown experiences. Wild and demanding, Papignut is left exactly as found for future climbers to explore.

After decompressing from the adrenaline of protesting dam construction, at the Albanian Prime Minister’s Office, buffered by police and military in bullet proof vests toting guns, the final adventures begin. Jon Bracey (UK) and Mikey Schaefer (USA) join the Luka for one last climb in the Prokletije Mountains.

After repeating an already established line, Jon and Luka leave behind their grassy meadow camp, offered free of charge by a local Albanian Farmer, at 3:30 am in hopes of unveiling a new, pristine line. 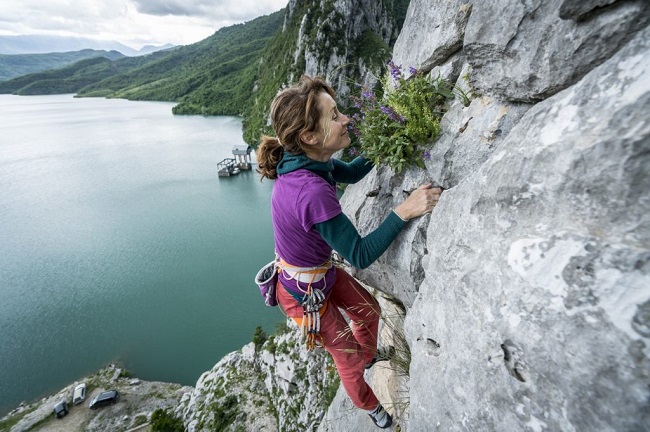 The passages kept opening in front of us, things ran smooth and climbing effortless. The last pitches spiced up the climb with technical climbing on very good rock, just enough to test our determination. Luka Krajnc

The last of the team pack the rental car and bounce along the rutted road back to the capital. Luka loads his car for the long journey to Slovenia.

In 1 month, 4000km, 10 boarder crossings and endless moments spent with like minded people, I end my trip at the starting point. This trip provided a great experience in an almost forgotten country that still hides many treasures that call for a discovery. On and off the walls. Luka Krajnc 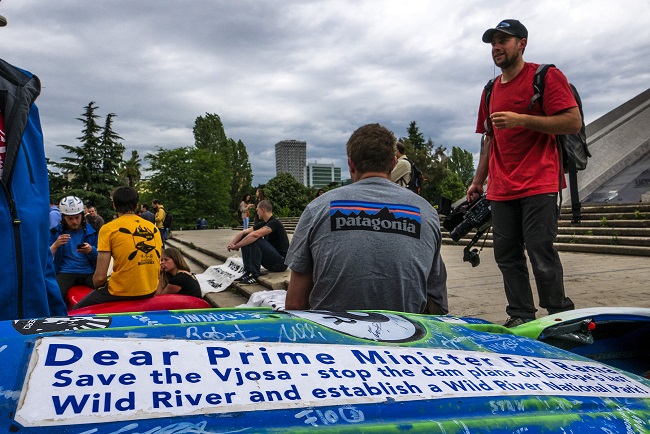