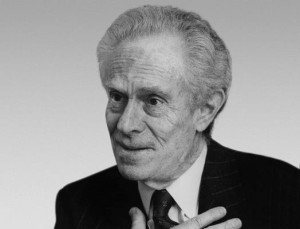 Messe Friedrichshafen chose to honour someone who has made an especially significant contribution to the outdoor industry. At the OutDoor 2014 trade show, Malden Mills-founder Aaron Feuerstein was lauded as OutDoor Celebrity of the Year 2014, the ninth edition of the award. During a special ceremony, industry insider and spokesman David Udberg described Aaron Feuerstein’s achievements as “monumental in terms of the development of the outdoor industry and in terms of the commitment to his people”. The trophy was accepted by Eric Yung, Director of Sales, Europe on behalf of Aaron Feuerstein, who lives in America.

There are self-made men and there are those who grow up in the business and develop it. Aaron Feuerstein is one of the latter. He is the son and nephew of industrialists, who were owners of a company called Malden Mills – one of the largest employers in Lawrence/ Massachusetts since 1906. In the 1960s Aaron Feuerstein took over the company, which was famous for its woollen workmen’s sweaters. But by the 1980’s woollen workwear sweaters were in decline and Malden Mills nearly went bankrupt.

Feuerstein had foreseen the end of the workman’s sweater and invested in the development of a new fabric that launched in 1981. He called the fabric “Polarfleece” and registered it with a patent under the brand name “Polartec Climate Control Fabrics”. “Time” magazine’s résumé of the twentieth century featured a list of the most important innovations; Polartec was included as one of the “100 Most Important Inventions of the 20th Century” – along with zips, plasters, computers, contacts lenses, washing machines, the contraceptive pill and Lego. “The development of Polarfleece revolutionised the way that we dress to protect ourselves from the cold,” it was said.

However, entrepreneurial greatness is only really demonstrated when the going gets tough. In 1995, this was certainly the case. Shortly after investing heavily in research, development and production of recycled fleece, a fire destroyed the entire production site.

CEO Aaron Feuerstein, who was seventy at the time, could have retired with the insurance money or, as was commonplace, moved production overseas. But, what about the workforce? In a demonstration of commitment to his staff and the town, Feuerstein decided to rebuild the factory on exactly the same site. He kept the entire workforce and even continued paying their salaries while the factory was being rebuilt. It is said to have cost Feuerstein 1.5 million dollars a week – and a total of 400 million dollars, of which the insurance only paid three quarters.

Feuerstein became known as the “The Mensch of Malden Mills” for his commitment to his employees and the town of Lawrence. The man himself lived modestly, never wasting money on luxuries, such as a private plane. He never had a chauffeur, preferring to drive himself. Feuerstein did more than just invent one of the most important items of functional outdoor clothing; he serves as a model responsible employer.

Aaron Feuerstein is now 88 years old; he left the company in 2004. Today, Polartec offers more than 300 different technologies, designed to keep users warm, dry and most importantly comfortable, in a wide range of outdoor activities.