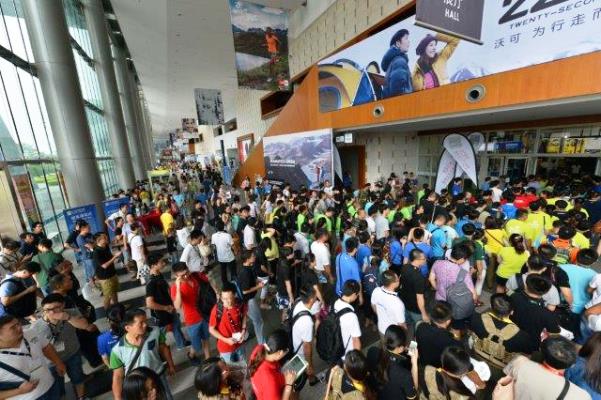 Knut Jaeger, Chairman of the Trade Show Company, in conjunction with colleagues from the outdoor industry (Columbia, TNF, Kailas, Northland), Richard Li, Director of organisational partner Ningfei and Ludwig Meier, Member of the Board at Messe Friedrichshafen officially opened the trade show with a press conference and the latest market figures. According to the latest market report, sales of China’s core outdoor brands rose by 16.2 percent in 2013. Total sales in the industry grew by 12.9 percent – from RMB 32.6 billion to RMB 36.8 billion (approx. 4.4 billion euros). Industry players were satisfied with the figures, particularly as for the first time in two years growth at sales outlets were below market growth. Back in 2012 these were increasing by 43.1 percent on average, opposed to market growth of 20.4 percent. “This is a key step towards normalisation and consolidation, even if the vast imbalance from the previous years has not been reduced by a long shot”, says Knut Jaeger commenting on the official market report of the trade show.
With “We need fresh air” as their motto, China’s market leaders presented their 2014/15 outdoor PR campaign to huge applause and publicised a t-shirt promotion across China for outdoor sports. The promotion was presented by Kailas President Baggio Zhong during a press conference. In relaunching the logo, Ludwig Meier, Marketing Director at Messe Friedrichshafen created the link to next year’s event. In 2015, Asia Outdoor will be ten years old.

Exhibitor and visitor figures:
In 2014, the number of exhibitors was about the same as the previous year (2013: 610) and visitors totalled 17,298 industry professionals (2013: 18,563). Some textile producers bid farewell to the fiercely competitive outdoor market. On the other hand, prominent newcomers like Gore Tex, Mountain Hardware, Primaloft, Asics, Technica, Salomon, Suunto, Columbia, Odlo, Skins or Li Ning made their debut Nanjing. A survey showed that in 2014 the quality of visitors rose sharply and this was confirmed by 87 percent of exhibitors. “Titas” representative Darren Gao from
31.07.2014 – Asia Outdoor 3/2014/FG Page 2
the Taiwanese textile industry had good news to tell. His exhibitors reported a high level of orders received at the trade show. Significantly more retailers, buyers and opinion formers – even from isolated provinces – came to Nanjing. The ranking is led by the Jiangsu, Shanghai, Zhejiang, Anhui and Guangdong provinces plus Beijing. There was strong attendance from representatives from the northern provinces of Shandong, Hunan, Hebei and Heilonjiang.

Show highlights 2014:
With specially dedicated areas (for kayaking, rafting and diving) and for running, the trade show featured the industry’s trending sports this year. Running was one of the most popular themes at the show and the space was visited by around 10,000 guests during the four-day event. “With this great audience, several brands in the Village (Asics, Columbia, Tecnica, The North Face, Salomon, Suunto, Northland, Li Ning Adventure, Odlo, Smartwool, Skins, and Camelbak) ask for larger booths for 2015”, comments Yang Wei, CEO of URG-Ultra Runner Gear and village organiser.
In addition to showcasing their products at the trade show facilities themselves, representatives from the industry and retailers showed that running’s important to them outdoors as well. On the eve of the third day of the show 600 runners (approx. 300 the previous year) assembled for the “2nd Asia Outdoor – Sanfo/Northland” running event in the Purple Mountains close to the city.
The tenth Asia Outdoor will take place from 23 to 26 July 2015. For more information visit www.asian-outdoor.com.
Statements Asia Outdoor 2014:

Andrew Law, Senior Product Manager Columbia HK & China (Brand: Mountain Hardwear):
“I truly believe that Asia Outdoor is the most prominent show in China, and it’s a good timing for us to show everybody and present Mountain Hardwear and also our products. Definitely it’s a good platform for us.”

Jochen Lagemann, Managing Director Europe & Asia Primaloft INC.:
“It is the first time for us to exhibit here at Asia Outdoor 2014 in Nanjing. But it is not the first time we work with the show, as we have visited the show before and we know the environment, and lots of customers here are our existing customers. It is absolutely the right move and right decision for Primaloft to join in Asia Outdoor.”