Focus on ITRA ranking at the end of the 2017 season

Who are the best men and women runners of the moment according to ITRA performance index? 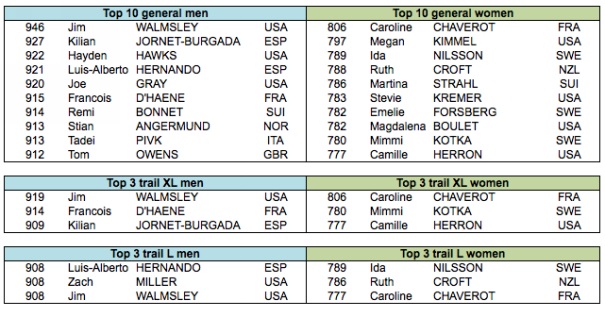 Declined in Quartz Elites, Quartz Event and Quartz Regular, the ITRA health program supported by Columbia, Compressport, Hoka One One, Salomon and The North Face in 2017 is developing and will continue its expansion in 2018. Ultra-Trail® World Tour confirms its commitment to the program next year. Salomon also announced the implementation of Quartz Event on its very new circuit of races, the Golden Trail Series. More information here.

All runners can participate at their level by indicating a maximum of medical information on their health space (available via the ITRA runner account). The health space is private and all the data are confidential. But, it is possible to make such information public if the runner wishes to do so.

All the races will take place on the same day, on Saturday, 12th of May. The first to line up on the track will be the CSP runners, followed by the teams selected for the trail world championships. The runners registered on the MiM will close the day’s race starts. More information here: http://penyagolosatrails.com

In 2016, the Spaniard Luis Alberto Hernando and the French Caroline Chaverot won the titles of World Champions on the long trail distance.

ITRA’s General Assembly, 13th May
ITRA’s Annual General Assembly will close the week. ITRA national representatives, founding members and Steering Committee members are expected for this international meeting, almost a year after the last elections of June 2017 in Italy.

The services developed in 2017:

The new runner page
The runner space has well evolved since its creation! Some customization and analysis tools now complete the runner page. Since last summer, it is possible to add up to 10 photos to its profile, to follow some runners and events and to share its favorite events. Regarding the analysis tools, it is possible to observe the evolution curve of the performance index or to know the total kilometers run on ITRA member races.

The quality questionnaire
The ITRA Quality Commission set up a quality questionnaire for all the race organizers wishing to give to their runners the opportunity to evaluate the overall quality of their event organization. The questionnaire will soon begin its first phase of tests before being available on ITRA website, it will be inserted in a poll sent by UTWT®.