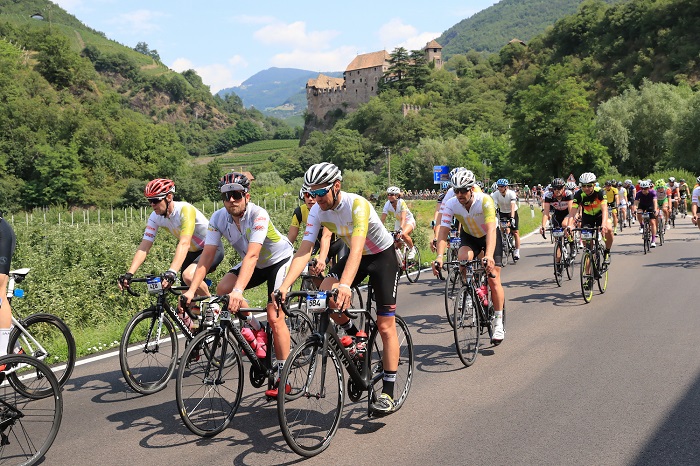 After a one-year enforced break, the starting signal for the Giro delle Dolomiti will be given on Sunday, 25 July. The 44th edition of this international cycling event attracts almost 400 cyclists from 25 different countries to South Tyrol, as well as local celebrities. In the course of the week, the participants cover a total of 670 kilometres and over 12,000 metres of ascent. Every day, two short sections are timed, while the majority of the distance is covered at a controlled pace in the company of likeminded cyclists.

The majority of the cyclists at the Giro delle Dolomiti want to soak up the nature and beauty of South Tyrol and the Dolomites with all their senses. They include not only the many leisure cyclists from all over the world, but also some former sporting greats who do not want to miss out on the tour or at least individual stages. For example, Francesco Moser, former World Champion, winner of the Giro d’Italia and several “classics” has confirmed his participation in the third stage. Werner Perathoner, a successful former Italian ski racer, will also be at the start. Talking of skiing: The President of the Organising committee of the Val Gardena World Cup, Rainer Senoner himself will mount his racing bike and cycle the complete tour.

A small group of ambitious amateur cyclists, on the other hand, will approach the Giro delle Dolomiti with big sporting goals. One of them is defending champion and local hero Eduard Rizzi, who intends to repeat his overall victory of 2019. “I do think that I’m well prepared. Of course, I will do what I can to win the Giro delle Dolomiti this year too. I have nothing to lose, as I won two years ago and no longer have anything to prove. But the main thing is that we can finally race again! This is what I look forward to most”, the almost 50-year-old cyclist from Sarentino, who is one of the veterans of the renowned traditional event, commented. In Thomas Gschnitzer from Vipiteno, who has already won two stages of the Giro delle Dolomiti, Rizzi will have a strong competitor from South Tyrol in the fight for the overall classification. In the women’s category, however, all eyes are on Monika Dietl from Freising in Bavaria, winner of the 2018 and 2019 editions.

Six stages in a breathtaking landscape

Six stages that fulfil every wish await Rizzi, Dietl and the many other cycling enthusiasts in the coming week. It all starts on Sunday, 25 July, when the field of riders will explore the area around Mendola after the start at the Bolzano Exhibition Centre. The next day takes the cyclists up Alpe di Siusi, and on Tuesday, 27 July, there will be a new premiere: For the first time in the history of the Giro delle Dolomiti, the route includes a stage from Mezzolombardo to the Dolomiti del Brenta. Following a day of rest, the circular tour continues on Thursday, 29 July with the classic circumnavigation of the Sella group. On Friday, the action focuses on Catinaccio, and on Saturday, 31 July, the Giro delle Dolomiti 2021 will conclude with the team time trial in Bassa Atesina.

The preparations for the Giro delle Dolomiti 2021 are largely completed. “Because of the pandemic‑related cancellation in 2020, we had over a year to prepare for the Giro delle Dolomiti. Although we had plenty of time available, it was nevertheless very difficult to organise the event. For many months, we – like many other sports organisers – were preparing in the dark and there was little clarity. But this is all forgotten now, and everyone involved is massively looking forward to our event. We were able to clear all larger and smaller hurdles. In the last few days before the Giro, there is still some fine-tuning to be done and some minor problems to be sorted out. I would like to take this opportunity to thank all our partners. And of course, our thanks go to all the staff who make the Giro delle Dolomiti possible in the first place,” OC President Bettina Ravanelli concluded.

Interested cyclists can register for the entire Giro delle Dolomiti until Saturday online and on site at the Bolzano Exhibition Centre. For individual stages, however, you can register until the evening before the respective stage.

More information on the stages of the 44th Giro delle Dolomiti: