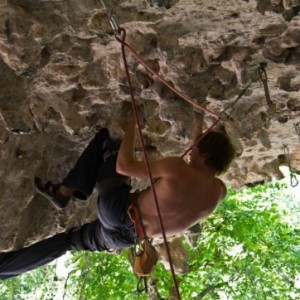 I think I will just write a quick blurb about my adventures last weekend.

Brendan Mitchell, a recent addition to the Brand of the Brave, told me he was going to be in Austin for his dad’s (Bruce) 50th birthday and that I should join him so we can climb together. I jumped at the idea. Tiffany Murphy and Sam Rothstein also drove down from Dallas and we meet up with Joe Gifford who lives in Austin. We all arrived at different times, so I ate dinner with Brendan and his family at this super nice golf resort place. It was the first time I used valet parking which was cool. Once Tiffany and Sam arrived we went to Joe’s house and set up camp in his back yard. Brendan came with us and camped out on my crash pad. It ended up being surprisingly cold that night. In fact when Brendan woke up he had ice on his sleeping bag. My 45 degree sleeping bag didn’t quite cut it than night.

Our first day of climbing was spent at Flat Creek. Sam was excited to just see rock and wanted to get on everything. Brendan, Joe and I were told of this 5.14a that was supposed to be amazing. Tiffany loves rock climbing and was equally psyched to be out. After we all got warmed up we went to find the Big Rig (the 5.14a). It took awhile considering Flat Creek isn’t all that big. We all gave it a go and made all the moves. I fell off near the top because my arms were about to explode and my pump was clouding my vision.

We all took a swim break. There was a cool cliff that allowed for cliff jumping and some deep water soloing. Brendan ripped a nice hold off in the roof, but the cliff was short so everything ended up well. Brendan definitely had the biggest balls that day and did a back flip off the cliff.