Dynamic moves and creative problems created an exciting final round in Meiringen, hosting its 3rd IFSC World Cup event. The Bouldering stars and rising stars did not disappoint, giving the crowd in Switzerland and viewers everywhere thrilling moments until the end.

Kruder Wins First
After standing on his first IFSC World Cup podium last year in Nanjing, Jernej Kruder rose to the top this weekend. First to climb in the men’s final, three times Kruder energised the audience by leaping for holds: the jump to the finish after controlling a challenging ladder of holds on the first problem; the quadruple dyno starting the second problem; and an unexpected drop to score the zone point on the third problem. 2017 Combined season champion Tomoa Narasaki (JPN) and Aleksei Rubtsov (RUS) topped two problems and scored four zone points to place 2nd and 3rd by attempts, and Jakob Schubert (AUT) closed out the round with the only top of a powerful fourth problem on his first attempt. Tomoaki Takata (JPN) climbed in his first IFSC World Cup final today and finished in 5th place. 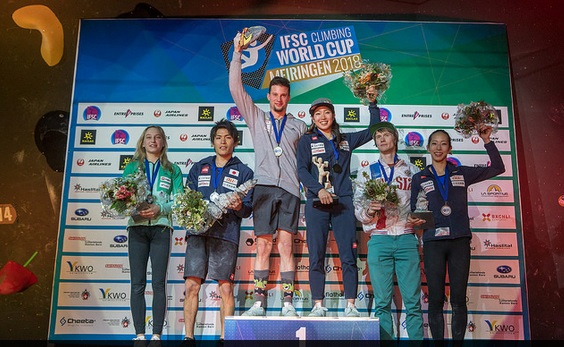 Nonaka Back on Top
4 female finalists began their podium quest in Meiringen with a flash of the first problem, solving advanced footwork and a sleek switch from heel to toe to continue upward after scoring the zone point. 2017 Combined season champion Janja Garnbret (SLO), Akiyo Noguchi (JPN) and Miho Nonaka followed with flashes of a dynamic second problem, but only Nonaka continued the perfection on the subsequent slab, completing a gruelling shoulder move on her first attempt. She carried the momentum into the fourth problem, solving a double-dyno into a palm press on the way to her fourth top and first gold medal since 2016. Garnbret made her 23rd podium in 27 events by finishing with a flash, and Noguchi rounded out the podium with four tops as well, requiring more attempts to do so. For the full results, visit the official event page.

YOG Watch: Lettner First to Finals
9 athletes competing at the Youth Olympic Games Buenos Aires 2018 competed in Meiringen this weekend. Sandra Lettner of Austria became the first qualified athlete to reach finals at an IFSC World Cup event in 2018, the first of her career. She climbed well all day, sticking the double-dyno rollover on the last problem in finals for 4th place. Giorgia Tesio of Italy also performed well, qualifying for semi-finals on Friday.

Next: Home of Speed Climbing
After celebrating 75 years of Sport Climbing events last year, Moscow welcomes the best Bouldering and Speed athletes next weekend to the first IFSC World Cup since 2010 in Russia, where the first Speed climbing competitions were organised. The schedule, starters, videos, photos and more can be found on the official event page, and tune-in to the IFSC homepage on April 22 for live streaming of the semi-final and final rounds. 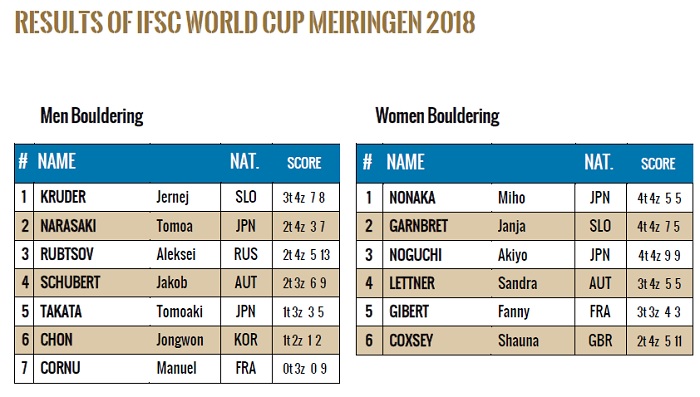