Marcello Bombardi of Italy won his first IFSC World Cup, Japan returned to the podium in Lead and Janja Garnbret made it back-to-back victories to start the Lead season at IFSC World Cup Chamonix.

Fans were rows upon rows in front of the climbing wall in the city centre of Chamonix, France, for the 2nd IFSC Lead World Cup of 2017. Always an exciting atmosphere, world-class Sport Climbing athletes put on another thrilling show under the lights this year for an energized audience at the Lead rematch.

First-time finalists, Boulderers excel
Bouldering stars Kokoro Fujii and Jan Hojer continued to excel in Lead but just missed the finals cut. Many young athletes were also on the cusp, including Anne-Sophie Koller, Brooke Raboutou in her first IFSC Lead World Cup and Villars finalist Hannah Schubert. Marcello Bombardi, Yuval Shemla and Löic Timmermans for the men and Tina Johnsen Hafsaas, Ievgeniia Kazbekova and Mia Krampl for the women all climbed in finals for the first time, and Shemla became the first athlete from Israel to do so.

First win for Bombardi, Japan back on podium
The men kicked off the climbing in finals, with local favourite Romain Desgranges tying in first. The Villars victor again fought hard and found good rests at Chamonix, amping the crowd early with the first top. The mark did not stand for long though, with many strong athletes following suit. Yuki Hada of Japan has yet to miss finals in the IFSC Lead World Cup this season, and he performed seamlessly on the last route. Bombardi of Italy also matched on the final hold, connecting all the moves in 4 minutes and 16 seconds and giving a passionate celebration before descending. Hada’s teammate Keiichiro Korenaga made it another top of the men’s finals route, taking 5 minutes and 28 seconds to complete the feat. A countback to previous rounds broke the four-way tie, bumping Desgranges off the podium. With Bombardi and Korenaga scoring the same, the tie-breaker went to time. The Italian’s quick final ascent won him the first Gold medal of his career.

Garnbret continues to dominate
The women’s finals also saw multiple tops. Anak Verhoeven was first to reach the chains, climbing to her second consecutive podium in 2017. The steep and sustained route also didn’t get the best of Korean Jain Kim, who returned to the podium at Chamonix. With a perfect scorecard so far, reigning season champion Janja Garnbret of Slovenia owned the final climb of the event and needed a top to win. With confidence like she showed in Villars, Garnbret once again overcame the pressure and flawlessly completed the final route in front of a roaring crowd.

Next: final road to Wroclaw
The IFSC Lead World Cup continues in Briançon, France, on July 28th-29th, and in the meantime the world’s best Sport Climbing athletes turn their attention to one of the signature events of the 2017 season: the World Games 2017 in Wroclaw, Poland. Climbing will take place on July 21st-23rd, and visit the dedicated event page for information. For the complete list of qualified athletes, please click here. 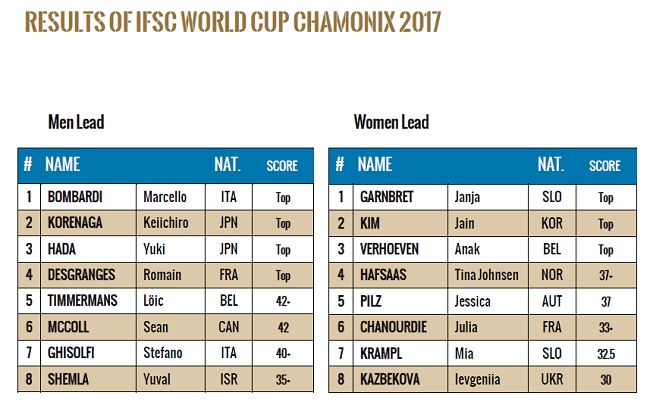