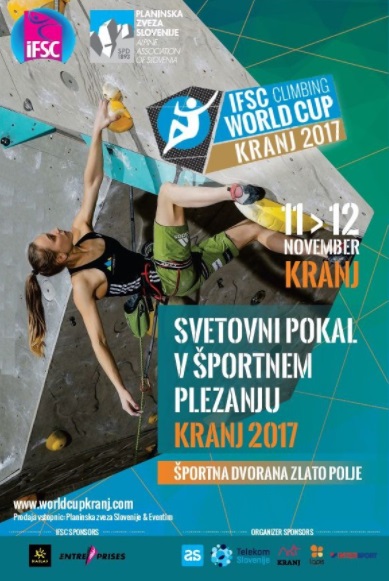 The 2017 IFSC World Cup season concludes on November 11-12 in Kranj, Slovenia, and this year Bouldering and Lead athletes will compete for the Combined season podiums. Kranj owns a distinguished competition climbing history, having hosted Lead World Cup events since 1996. The Combined and Lead season medals will again be decided there at the 8th and final IFSC Lead World Cup of 2017.

A warm welcome for Garnbret
Janja Garnbret improved on her historic 2016 season by becoming the first athlete to win eight IFSC World Cup events in a single season. The 18-year-old Slovenian star defended her Combined and Lead season titles in China last month, and she will again be in the spotlight in front of her home crowd in Kranj.

The first Lead event for Coxsey
Shauna Coxsey (GBR) is among the Bouldering stars vying for a spot on the Combined season podium. The Bouldering season champion is currently ranked second in the Combined rankings and will be competing in her first IFSC Lead World Cup in Kranj. To maintain this positioning, she will have to contend with Lead star Jain Kim (KOR), ranked third. Bouldering legend Akiyo Noguchi (JPN) is also in the running for the Combined podium.
Bouldering season champion Jongwon Chon (KOR) and Bouldering runner-up Tomoa Narasaki (JPN) soared in the Combined rankings after their strong Lead climbing performances in China last month. Both athletes are already guaranteed a place on the Combined podium, and they will compete for the top spot in Kranj alongside Narasaki’s teammate Kokoro Fujii (JPN). Even a win from Fujii may not be enough to overtake them, but he can defend third place from Jan Hojer (GER) and Romain Desgranges (FRA) with a strong finish.

A decisive Saturday for Desgranges
Desgranges has won more IFSC Lead World Cup events this year than any other male athlete (3). He can clinch the Lead season title on the first day of climbing in Kranj by placing 15th or better in semi-finals. Anything less and Stefano Ghisolfi (ITA) can catch him with a final victory. Ghisolfi and Keiichiro Korenaga (JPN) already secured a spot on the Lead season podium. Also keep an eye on 2016 Lead season champion Domen Skofic (SLO), climbing in front of his home crowd, and Alexander Megos (GER), who is back on the start list after last competing in Arco.
Kim and Anak Verhoeven (BEL) will stand alongside Garnbret on the women’s Lead season podium, and a final medal in Kranj would guarantee second place for Kim. Be sure to track the progress of Slovenian Lead legend Mina Markovic as well.

Watch it LIVE
Tune-in to the IFSC homepage on November 11th and November 12th to watch the LIVE streaming: www.ifsc-climbing.org
More information can be found on the Kranj event page, and chat with us on Twitter at #IFSCwc. 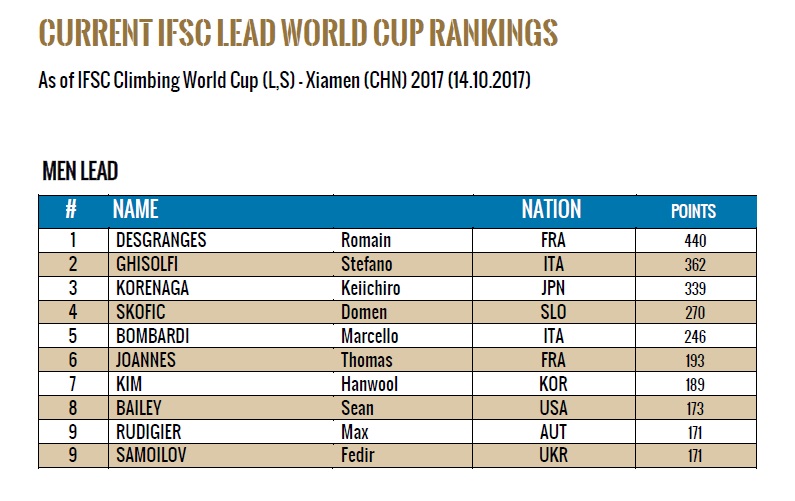 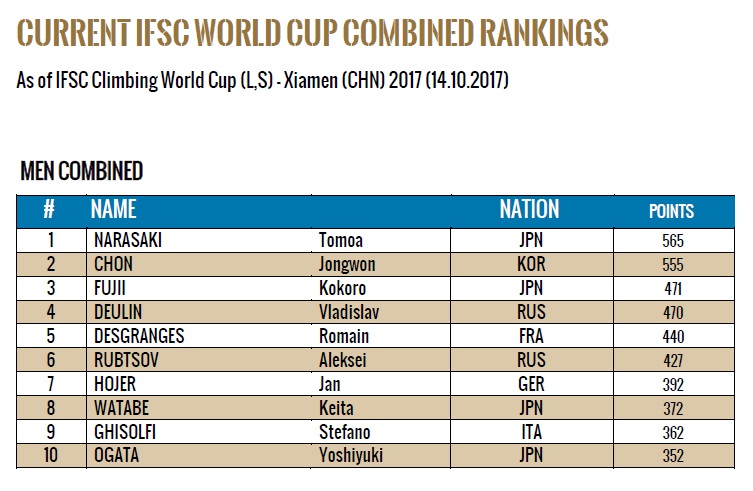