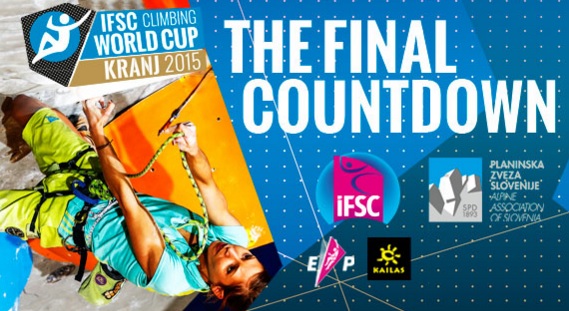 All these athletes have won at least one IFSC Lead World Cup this season, and they all look like very serious contenders for the title. Fresh from his victory in Wujiang and from a 9b first ascent in southern France that only took him a couple of tries, Adam Ondra seems to be in
particularly great shape at the moment. Yet, anything can happen during a competition, and he knows it. The race for the Lead World Cup title has never been so close, and at this point, it can be anyone’s game in Kranj!

Can Mina Markovic take back the title ?
The women’s podiums have seen only two competitors on top so far this season: Mina Markovic (SLO) and Jain Kim (KOR) with 3 gold medals each. The two are now ranked 1st and 2rd respectively, and their legendary rivalry will once again reach an apex in Kranj as they compete for the title.
Mina Markovic has not won the IFSC Lead World Cup ranking since 2012, and she stands a good chance of taking back the title this year. She has a history of doing very well in front of her home crowd, and Jain Kim will have to climb her absolute best to defend her title!
Another climber to watch out for in Kranj is Jessica Pilz (AUT), who is currently ranked 3rd. She will be facing Anak Verhoeven (BEL), who is still in the running for the Lead World Cup 2015 bronze position. It will all come down to this last IFSC World Cup for these top-ranked athletes!
One competition, three podiums
As always, the IFSC World Cup season will end in Kranj with 3 podiums in each category (male and female), for a total of 6 winners. There will be one podium for the IFSC Lead World Cup Kranj 2015, one podium for the IFSC Lead World Cup Ranking 2015, and one podium for the IFSC World Cup Combined Ranking 2015. Adam Ondra and Jain Kim currently lead the combined ranking, but the competition is fierce, with many top-climbers eager to grab a podium spot!

Join in the action!
For more information on the event and access to the live streaming of the semi-finals and finals, join us: http://www.ifscclimbing.
org. As always, we are present on Twitter during competitions, so reach out with the hashtag #IFSCwc.