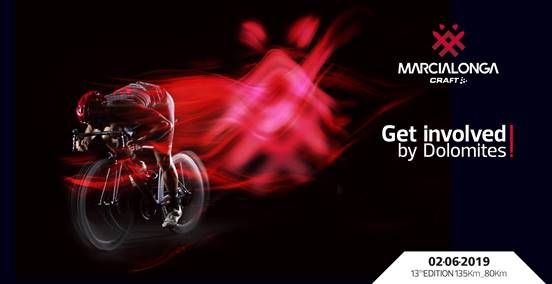 Marcialonga Craft on Sunday, June 2nd at 8.00 a.m. in Predazzo (Trentino).The 13th edition as stage of “Prestigio” and “Zero Wind Show” circuits. Cecchini, Cini, Avanzo, Elettrico, Salimbeni, Rosa, Zanrossi, Pontalto, Pareschi and Leonardi are all enrolled. Registration open at the price of 43 euro until May 31st – on Saturday comes the Giro d’Italia.

Marcialonga Craft, scheduled on Sunday, June 2nd in Predazzo at 8.00 a.m., has been discovered step after step as a rare pearl, but in a few days the 13th edition will be ready for the challenge with protagonists the strongest amateur riders of Italy (and not only), without forgetting that the cycling race will be valid as the second stage of Combined Punto3 Craft (standing of Marcialonga events) and for the challenges “Prestigio” and “Zero Wind Show”.

One of the most ever competitive parterre is ready to start, with the presence of the last two editions winner, Stefano Cecchini from Tuscany, and the so called “Prince of Italian Granfondo”, Tommaso Elettrico. The duo will have the tough task to control Fabio Cini, a specialist of Trentino mountains and a pretender for a podium place. Games are open, and among others we have to count the local riders Francesco Avanzo and Daniele Bergamo, with the high probability of a choice for the medium distance of 80 k and 2488 meters in elevation gain with Passo Costalunga and Passo Pampeago. For the Granfondo of 135 k and 3900 mt. of elevation – wich will face also Passo San Pellegrino and Passo Valles – the race will see at the start Domenico Romano and Luigi Salimbeni, respectively 2nd and 3rd of the last edition, while in the women field Deborah Rosa, 2nd in 2018, could have her revenge. On the short competition we point out Riccardo Zanrossi, Andrea Pontalto and Alessio Pareschi, the podium of last year. In the end, on the pink race we mention Jessica Leonardi, winner of women 80 k in 2018, but an expert also of the long distances as well as Barbara Zambotti, 2nd in the 12th edition and present also this year.

Marcialonga Craft weekend will be an unforgettable one, opened by Minicycling on Friday, May 31st at 5.00 p.m. in Predazzo village (meeting at 3.00 p.m.), while on Saturday, June 1st the Giro d’Italia pro race will appear on Val di Fiemme roads, with the e-bike competitors at 9.30 a.m. and the 20th stage between 2.30 p.m. and 3.00 p.m., showed on the maxi screen in SS. Apostoli Square during the all afternoon. Team contest will also characterize the program with the “Winning Team Challenge”, where the time of each climb (MLCraft Costalunga, MLCraft Pampeago, MLCraft S.Pellegrino, MLCraft Valles) counts (it is possible to modify team members until Thursday, May 30th) and the ambitious contests of King of the Mountain and Queen of the Mountain on the two segments ML Craft Pampeago and ML Craft Passo Valles. A free registration for 2020 edition will be the prize. Enrollments are still opened at the price of 43 euro until May 31st (or Saturday, June 1st at 48 euro both on-line or on-site) with a technical gilet from Craft Sportswear included.