On May 12th 2018 the 8th World Trail Championships took place in Spain, at Castellón de la Plana. Ragna Debats(766) (Netherlands) and Luis Alberto Hernando (914) (Spain) were unbeatable over this challenging 85 km course, finishing in 9 hours and 55 minutes and 8 hours and 38 minutesrespectively. 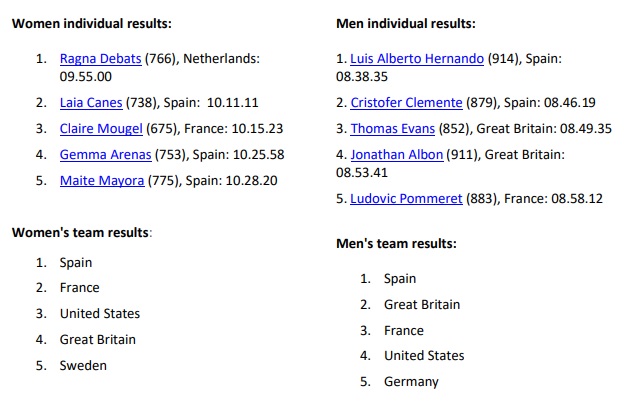 The race started from the athletics track of Jaume I University at 6.00 a.m. The early pace was very fast as the runners headed out along the narrow, climbing trails of the first part of the course. In the men’s race, Zach Miller (USA) (ITRA IP Index 906) soon moved into the lead, with Sébastien Spehler (France) (IP Index 886) hot on his heels and Sylvain Court (France) (IP Index 890) and Thomas Evans (GB) (IP Index 852) close behind. After leading the race at a blistering pace under a blazing sun for the first 62 km, Miller then fell back, finally coming eigth overall. Thomas Evans (GB), who was not far behind the American, managed to sustain the pace and remain with the leading group, finally finishing in 08.49.35 to take third place in the World Championships. Luis Alberto Hernando (Spain), now Triple World Champion, was in second place until km 51 and overtook Miller (USA) at km 62. None of the British, French or American runners nor fellow Spaniard Cristofer Clemente (IP Index 878) – who moved into second place at km 79 – were able to catch Hernando. The Spanish runner eventually finished in 08.38.35 to win the Championships. Cristofer Clemente ran a very controlled race; back in twenty-seventh place at km 40, he worked his way steadily up through the field to finish second in 08.46.19. With the support of Pablo Villa (865) (thirteenth overall and third Spanish runner), Spain won first place in the team event.

In the women’s race, Ragna Debats women (Holland) (IP Index 766) very quickly took the lead. None of the other runners could match her sustained fast pace and she finished first in 08.55.00. Also, in the leading pack at km 30 were Anne-Marie Madden (Canada) (IP Index749), Adeline Roche (France) (IP Index 761) and Amandine Ferrato (France) (IP Index 761) – respectively Trail World Champion and Vice-Champion, and Azara Garcia (Spain) (IP Index 763), Gemma Arena (Spain) (IP Index 753) and Laia Canes (Spain) (IP Index 735). At km 51, Laia Canes was in third place just behind Adeline Roche (France) before overtaking her 10 km further on and finishing second in 10.11.11. Claire Mougel (France, IP Index 675), who was amongst the top ten runners for much of the race moved into fourth place at km 62, into third place at km 80 and finally finished third in 10.15.23. Gemma Arenas came in fourth, helping Spain win the team event highest-ranked woman in each team one or two days before the race. The object of the samples was to ensure, before the start of the race, that none of the athletes were at any medical risk and that their respective profiles presented no abnormalities that might endanger their health.

A total of 102 athletes were tested; the results are as follows:
– 90 normal profiles: no risk identified
– 7 abnormal profiles: biological values outside of the standards of laboratory but not presenting any major health risk
– 5 profiles with one or more potential pathologies: profiles requiring medical care but presenting no major health risk
– 0 abnormal profiles
– 0 “no start rule”: the athletes identified as presenting “abnormalities” or ” potential pathologies” before the race were not found to be at any increased medical risk.

All athletes were able to join the start of the 2018 World Championships with peace of mind.
To date, the QUARTZ Program has been implemented at over 35 events; 41 elite runners (18 of whom have made their profile public) are followed throughout the year.

2019 TRAIL WORLD CHAMPIONSHIPS The next Trail World Championships will be held on 8 June 2019, at Miranda do Corvo in . A 50 km course designed by the organizers of the Trilhos dos Abutres awaits the runners who will compete for the titles of short Trail World Champion.