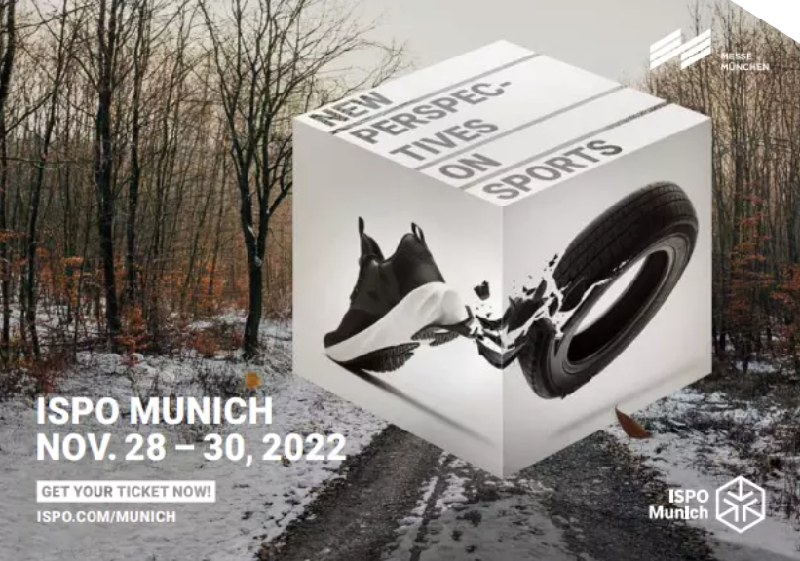 Following a two-year Covid-related interruption, ISPO Munich will be organized for the first time from November 28 to 30 at the Munich exhibition grounds. The restart will be held under the motto of “New perspectives on sports.” A new addition this year: a centrally located Future Lab where all key issues involving innovation, retailing, digitalization and sustainability will be discussed and presented, among other things. Exhibitors and visitors will finally have a chance to meet in person once again in a total of ten halls that are nearly sold out.

Sports and the sporting-goods industry have changed more in the last two years and a half than they would have changed in 10 years in the past. On the one hand, sub-segments of the sporting-goods industry have generated positive sales results during the pandemic. On the other, new challenges including supply-chain disruptions, altered order cycles and increased digitalization have to be tackled. A potential energy shortage looming on the horizon could also have a massive impact on entire segments of the winter sports industry. “That’s the reason why we need new perspectives of the market, consumers, retailing and sports themselves,” Tobias Gröber, the Head of the ISPO Group, said in describing the new concept for ISPO Munich, which is being held in 2022 for the first time at the end of November and, thus marks the start of the order period. “That’s why we are converting a central hall into an innovation lab at ISPO Munich in November. The most important leaders in the industry will meet here and talk about the action that must be taken. We intend to be a lobbying platform and to provide sports with a voice that is equal to its place in society.” Exhibitors from 55 countries will showcase their products at the trade fair. The maximum booth size was reduced to 200 square meters.

Even though the 10 halls that will be used by the trade fair are nearly sold-out, ISPO Munich has set aside a large, central area for the “Future Lab.” The innovation lab is designed to be the new heart of the exhibition. It will serve not only as a venue for discussions about new products and transformation, but also enable visitors and exhibitors to look beyond the horizon of their own industry in the Retail, Digitize and Sustainability Hub. The hall will also serve as a stage for a large number of athletes who are expected to attend ISPO Munich this year, for the ISPO Award and, naturally, for the ISPO Cup Night. The presentation of the newly conceived ISPO Cup will be held in the Future Lab on the evening of the first exhibition day. The award will be presented to initiatives organized by athletes and sport influencers who make a positive contribution to society.

The ISPO Conference will be held in the Future Lab as well. Industry leaders and experts from other sectors will talk about the major issues of the day, including sustainability, inclusion and diversity, as well as the challenges faced by logistics and retailing. The speakers will include Merijn Dols, the Global Director for Open Innovation and Circular Economy at Danone, Laura Santucci, a former political adviser in the Obama administration and the former Director of the World Food Program, and Hunter Lovins, the CEO of Natural Capitalism Solutions and a member of the Club of Rome.

Many active and former athletes are expected to attend ISPO Munich as well. Triathlete Sebastian Kienle will explore the issue of biohacking during a live recording for the Red Bull podcast. Christian Schenk, the Olympic gold medalist in the decathlon who recently organized an all-inclusive festival for people with and without disabilities, will talk about diversity and lobbying for good. Under the motto “Stories to be told,” a session organized by the initiative “Frauen Verbinden” (Women Connect) will present prominent female entrepreneurs, personalities and athletes. The alpinist Kazuja Hiraide, who was the first Japanese to receive the 17th Piolet d’Or Award, the “Academy Award” of mountaineering, has also confirmed his attendance.

The restart of ISPO Munich 2022 will be launched with the help of a new advertising campaign called “New perspectives on sports.”

“ISPO has been much more than a simple sporting-goods trade fair for many years now,” said Lena Haushofer, the Exhibition Director of ISPO Munich. “As you know, many Covid-related restrictions still apply to travel. Nonetheless, 90 percent of exhibitors at this year’s ISPO Munich come from countries outside Germany. This level of internationality clearly underscores the vital and valuable role that ISPO Munich plays as a global hub that fosters personal contact among manufacturers, specialist retailers and other industry players.”