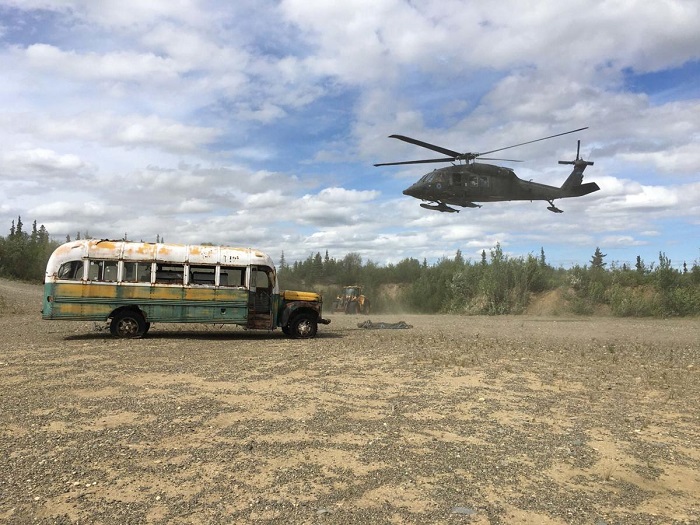 The state of Alaska moved a notorious tourist attraction — often known just as “the bus” — from the Stampede Trail on the west side of the Teklanika River on Thursday.

The bus has long been a destination for pilgrims enamored with the book and subsequent movie “Into The Wild.” Some people have died making that journey to the bus. The Alaska Department of Natural Resources called it a “deadly attraction.”

“After studying the issue closely, prioritizing public safety and considering a variety of alternatives, we decided it was best to remove the bus from its location on the Stampede Trail,” Commissioner Corri A. Feige said in a press release. “We’re fortunate the Alaska Army National Guard could do the job as a training mission to practice airlifting vehicles, at no cost to the public or additional cost to the state.”

The abandoned vehicle, variously known as “Bus 142,” the “Into the Wild” bus or the “magic bus,” had been used by the Yutan Construction Co. to house employees during the construction of a pioneer access road between Lignite and Stampede and was subsequently abandoned upon completion of the road in 1961. It rested about 25 miles west of the Parks Highway on Stampede Trail, according to the DNR press release.

Used since as an emergency shelter, it became well known after John Krakauer’s 1996 book “Into the Wild” and a 2007 movie of the same name popularized the story of 24-year-old wanderer Chris McCandless, who died there alone in 1992 after a 114-day stay.

It became a magnet for travelers. Many were not prepared for the journey and had to be rescued. Tragically, some died.

In July 2019, a 24-year-old Belarus woman died while trying to cross the Teklanika River on the Stampede Trail near Healy. In February of this year, five tourists from Italy were rescued from the location. In April, a tourist from Brazil was rescued at the same spot.

So the bus was often a topic of controversial conversation in the Denali Borough and statewide. Although the borough did not own the bus or the land, Denali Borough emergency services were often called in by Alaska State Troopers to rescue travelers who got in trouble during their journey to or from the bus. The National Park Service also got involved in rescues.

In March 2020, the Denali Borough Assembly passed a resolution supporting removal of “the derelict Fairbanks City Bus 142.” The resolution was intended to provide support for the state if the state ever decided to move the bus, which had been at that site since 1959.

The resolution came about just after families of some of the people who died hired an engineering firm to study the feasibility of building a footbridge over the Teklanika River. The families wanted to make the journey to and from the bus safer. The borough assembly declined to participate in that project.

On Thursday, the bus was placed on a flat bed trailer and was last seen heading south on the Park Highway. Commissioner Feige said in a press release that “the bus will be stored at a secure location while DNR considers all options and alternatives for its permanent disposition.”

“We encourage people to enjoy Alaska’s wild areas safely, and we understand the hold this bus has had on the popular imagination,” Feige said. “However, this is an abandoned and deteriorating vehicle that was requiring dangerous and costly rescue efforts. More importantly, it was costing some visitors their lives. I really appreciate the Alaska National Guard for making it possible t achieve a safe, respectful and economical solution to this situation.”