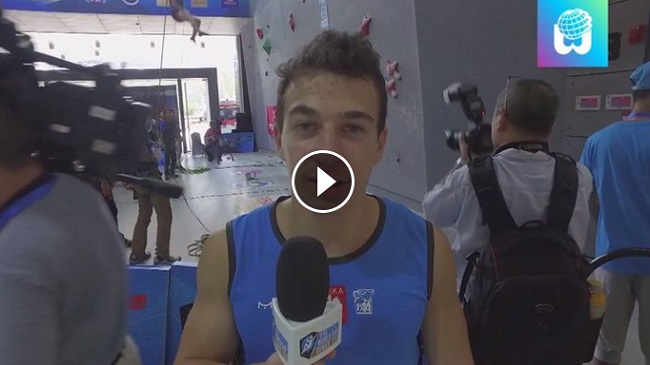 The 10th edition of The World Games opens today in Wroclaw, Poland. More than 3,000 athletes from 31 sports and 111 countries will take part in the event, including 66 Sport Climbing athletes representing 23 countries and all 5 continents who will compete this weekend on July 21st-23rd.

The World Games takes place every four years and gathers the most elite athletes. Lead and Speed climbing have been showcased since 2005, and this year Bouldering will make its debut. The climbing will start with Bouldering on Friday, followed by Speed and Lead on Saturday and Sunday. World, season, continental and youth champions will all be present.

Sport Climbing stars from around the world
Japan has dominated this IFSC Bouldering World Cup season, with seven men and four women ranked in the top ten. Veteran Akiyo Noguchi and runner-up Miho Nonaka are leading the way for the women, and 2016 season champion Tomoa Narasaki and Kokoro Fujii have been strong for the men. Also be sure to track Russian Aleksei Rubtsov, who has won the most medals for the men (4).
World champion Janja Garnbret of Slovenia has yet to lose an IFSC Lead World Cup in 2017. Her Slovenian teammate Mina Markovic won Gold at The World Games 2013 in Cali and will join her, as well as runner-up Jain Kim and Anak Verhoeven. For the men, European champion and 2017 frontrunner Romain Desgranges of France is the athlete to watch in Lead. Also tying in will be 2016 season champion Domen Skofic and Cali winner Ramón Julian Puigblanque.
Speed climbers have been blistering fast this IFSC World Cup season. Multiple athletes approached world records at the first two events in China, and Iranian Reza Alipourshenazandifar and Iuliia Kaplina of Russia both set new world records there this year. Russia has crowded the podiums so far, placing two men and two women on each one. In addition to Kaplina, who leads the women’s rankings, among the team’s standouts are 2014 and 2015 season champion Mariia Krasavina, Speed legend Stanislav Kokorin and the ever-quick Aleksandr Shikov. Also keep an eye on world champion Marcin Dzienski, who is looking forward to race in front of his home crowd.

Who’s watching
Dr. Thomas Bach, President of the IOC, will attend the Opening Ceremony and several sports events during his stay. From the IFSC, President Marco Maria Scolaris, Secretary General Debra Gawrych, Sport Director Jérôme Meyer and Event Officer Alessandro Di Cato will be in attendance.
“After a fruitful cooperation with the local organising committee and the IWGA, we are excited for the action to start,” says Mr. Meyer. “The best Sport Climbing athletes have qualified to shine on this great stage in Wroclaw, in the midst of the strong Sport Climbing culture and community of Poland.”

LIVE streaming
The World Games 2017 in Wroclaw can be watched around the clock on the Olympic Channel. The schedule, starters, results and more information for Sport Climbing can be found on the event page, and please click here for the full list of qualified athletes.