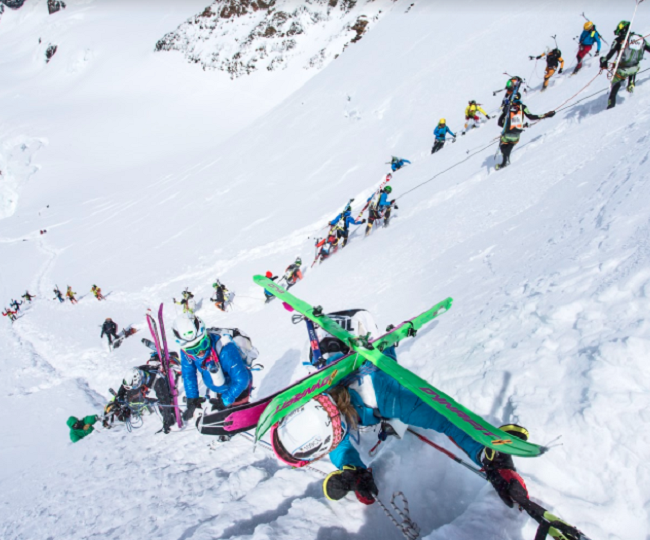 The countdown has started for the XXI edition of the Mezzalama Trophy, the last race of the season on the La Grande Course circuit. At 5.30 a.m. on Saturday 22 April, in the company of the military band (“Fanfara”) of the Val d’Ossola Bersaglieri, the 900 “mezzalamisti” will set off up the main street of Breuil-Cervinia to tackle the first challenge of the day, the Theodul Pass.

The programme for the XXI edition of the Mezzalama Trophy will kick off officially on Friday morning when the youngsters in the Cadet and Junior categories will be racing over the slopes of the Matterhorn in the second edition of the Mezzalama Jeunes. The competition, specially designed for the upcoming generation of ski-mountaineers, will be raced at an altitude of between 2,800 and 3,500 metres, starting from the Cime Bianche-Laghi and reaching a height of 3,480 metres at the Plateau Rosà. The course is entirely off-piste and involves various transitions and some difficult technical stretches, such as the Theodul Pass which has to be tackled on foot, with crampons on, and skis tied to the backpack. Even though the weather forecast for the entire weekend seems to be good, knowing how changeable conditions on Monte Rosa and the Matterhorn can be, Adriano Favre and his fellow guides have already planned an alternative course.
Over the last few days, the technical director of the Mezzalama Trophy, Alpine guide Adriano Favre, with the collaboration of other mountain guides from the Valle d’Aosta, is putting the final touches to the course and ensuring that the long trail connecting Breuil-Cervinia to Gressoney over the glaciers of Monte Rosa is properly secured.
«Before this recent snowstorm, and particularly the high winds – Adriano Favre told us – the trail was in fairly good condition. There’s not much ice, but the small amount of snow we had this winter means we have to watch out for crevasses. Bivouacs and markers are already in place at high altitude and as soon as the weather conditions improve we will go back up and finish laying the trail. We will probably go up on Thursday or Friday to fix ropes to the west face of the Castor and the Naso del Lyskamm, and on Thursday we will also finish marking and securing the course for the youth race».
«There isn’t much snow at the start and finish – said Favre – but this won’t create any particular problems. The competitors will put on their skis after the start, when they get to the end of the footpath from Breuil-Cervinia. And in Gressoney, the athletes will have to run on foot for about 5 minutes to reach the finish line since there is snow only as far as the Bedemie ski slopes».
«According to the forecasts, – Favre concluded – provided by Luca Mercalli and his team on the Nimbus site, there will be a drop in temperature and clear skies, a situation which shouldn’t give us any particular problems».
As far as the starting list is concerned, the operational secretariat of the Mezzalama Trophy Foundation is presently receiving the last-minute changes to the 300 teams representing 16 nations entered in the race: Italy, the Czech Republic, Sweden, Switzerland, France, Spain, Austria, Andorra, Japan, Norway, Belgium, Germany, Poland, Romania, Canada and the Slovak Republic.

Mezzalama Jeunes
The Mezzalama Jeunes, a competition specifically designed for the Cadet and Junior categories and part of the prestigious La Grande Course circuit, will be raced on the slopes of Breuil-Cervinia on Friday 21 April: an important prelude to the XXI edition of the Mezzalama Trophy due to start the following day.
The Mezzalama Jeunes will be a spectacular and technically demanding competition raced at an altitude of between 2,800 and 3,500 metres, starting from the Cime Bianche-Laghi and reaching a height of 3,480 metres at the Plateau Rosà. The course is entirely off-piste and involves various transitions and some difficult technical stretches, such as the Theodul Pass which has to be tackled on foot, with crampons on, and skis tied to the backpack. The youngsters in the Cadet and Junior categories will be able to get their first taste of what makes the Mezzalama Trophy so special.
The Mezzalama Trophy Foundation and the entire La Grande Course circuit believe strongly in these competitive events for young athletes in which Juniors and Cadets can compete against each other and have a tough and thrilling skimo experience in total safety.
The winners and all the other participants will be applauded by the seniors just before the technical briefing for the XXI edition of the Trophy».

Streaming Video (also on Mountainblog – click here)
Coverage will start at 8.30 a.m. on 22 April with a running commentary by Silvano Gadin, Eurosport commentator and the Mezzalama Trophy’s official ‘voice’ since 2005. Silvano will be broadcasting from the finish line in Gressoney La Trinité in the company, in turn, of Stefania Belmondo (2 Olympic golds and 4 world champion titles in cross-country skiing), Arianna Follis (world cross-country skiing champion, Olympic bronze medallist and winner of 2 editions of the Mezzalama Trophy) and Bruno Brunod (two-time world skyrunning champion).
All the key moments of the race (start, arrival at the first checkpoint, overtakes and catch-ups) will be broadcast during the coverage, as well as various interviews with the protagonists before the start.
Gadin will also be able to link up with the fixed camera at the Quintino Sella hut where Francesco De Fabiani (winner of both the 2014/15 and 2015/16 cross-country World Cup for under-23s) and Paolo Riva (member of the Italian cross-country team’s technical staff) will be on tap to provide the latest updates coordinated by the journalist Maurizio Torri.
Marco Camandona, an Alpine guide from the Valle d’Aosta and long-standing friend of the Mezzalama Trophy, will be the broadcast’s “wild card”: connected by phone, he will move around the course to bring us live coverage of the competitors’ feats.
Live streaming will terminate with the arrival of the first women’s teams, expected to be around 11.30 a.m.