Shauna Coxsey bounced back from her 2016 injury with a sweep of all four finals problems at IFSC World Cup Meiringen, and Kokoro Fujii returned to the top of the podium with three crucial bonus holds.

After hosting the first event last year, Meiringen opened 2017 with another fantastic show of sport climbing. Elite athletes from around the globe pushed themselves to the limit until the very end, giving an exciting window into their form this season.

Japan shows depth, Klingler climbs in finals
The experience and strength of 2016 season champion Shauna Coxsey was on display all weekend. Despite the spotlight and questions about her recent injury, the star from Great Britain answered with a composed, crowd-pleasing performance in every round. World champion and Swiss native Petra Klingler amplified her home crowd with spectacular moves of her own, but ended one top short of a medal. Janja Garnbret of Slovenia qualified for finals as well and finished sixth.
Japan shone bright in semi-finals, with four athletes qualifying for the final round. 2016 season champion Tomoa Narasaki was surprisingly not among them, finishing in the same 21st place as teammate Akiyo Noguchi, revealing the depth of their team. Slovenian Jernej Kruder and David Firnenburg of Germany were also strong, finishing 5th and 6th in the competition.

Clean sweep for Coxsey, golden effort for Fujii
The last problems for the men were challenging, and in the end the bonus tally was the difference maker. The inverted start to M1 brought out some creative climbing, but power moves on low percentage holds proved too much for all six finalists. Keita Watabe of Japan was first to top, balancing his way across the lower section of M2 before popping to the final hold with emphasis. His teammate Kokoro Fujii soared to first place on M3, making the dynamic sequence look easy and facing the crowd at the top with a big smile and triumphant fist. Runner-up Aleksei Rubtsov, last year’s winner, exceled throughout the competition and also topped the problem. Before the night was over, Rei Sugimoto wowed the crowd with a top of M4, sticking the double dyno and stretching wide for the final hold. With just one top apiece, Fujii’s quick flash and three bonus holds gave him the victory.
For the women, a big early move stumped a few athletes on W1, and only Coxsey kept the friction thereafter on an intimidating, blank volume. W2 was more powerful, and Katharina Saurwein made her presence known at Meiringen by joining the British star at the top. Most athletes solved the extreme walking of W3 and two concluding power moves, including the ever-dominant Miho Nonaka of Japan and Serbian Stasa Gejo, who had the best World Cup performance of her career so far. Already victorious, Coxsey amped the crowd with one last top, finding a high foot to control the dynamic, out-stretched finish.

Up Next: Timers and Tops in China
The season is only beginning, and the best bouldering athletes in the world go head-to-head again at the first stage of the China tour. Chongqing will host the second IFSC Bouldering World Cup and first IFSC Speed World Cup on April 22nd-23rd, followed by IFSC World Cup Nanjing the following weekend. Stay tuned to the IFSC website for LIVE streaming details.
Find starters, schedules, replays and more on the dedicated event pages for Chongqing and Nanjing! 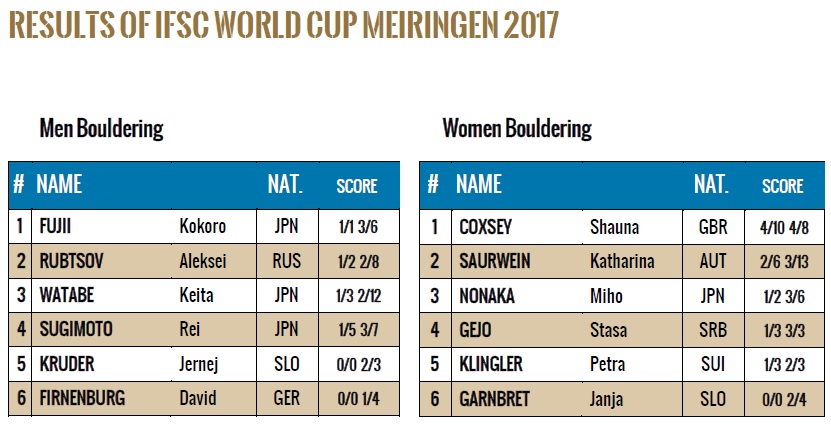 Full replays can be viewed on our YouTube channel.