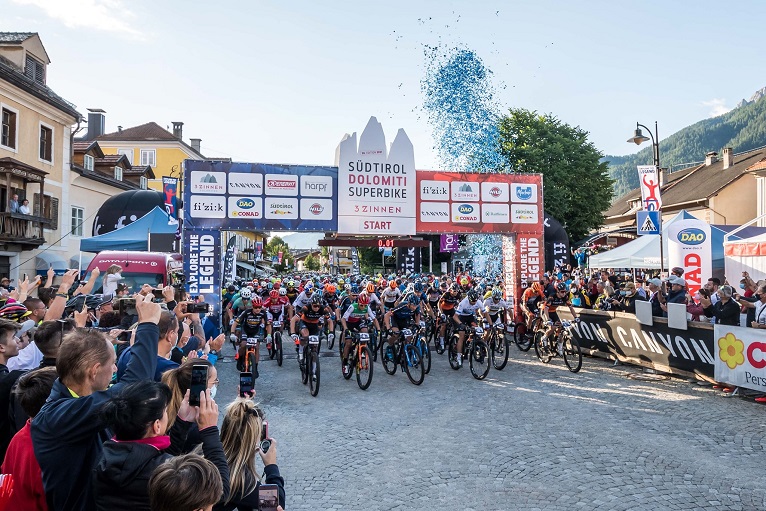 The Dolomiti Superbike is one of the most renowned MTB marathons in the world. It attracts thousands of cycling enthusiasts every year. It’s not surprising, therefore, that you can find one or the other superstar among those registering to take part. This year, there are even two winners of Olympic gold among them.

One is Jaroslav Kulhavy from the Czech Republic. The 37-year-old won cross country gold at the 2012 Olympic Games in London. Four years later he returned from Rio de Janeiro with Olympic silver. To make this CV even more impressive, he also became Marathon World Champion in 2014, between winning his two Olympic medals. The second world‑class athlete who will take part in the Dolomiti Superbike 121 km distance with an elevation gain of 3400 meters on 9 July is 46-year-old Miguel Martinez from France, who won Olympic gold in 2000 in Sydney. The year of the millennium was the best of his career, and he won not only Olympic gold but also the World Championship title and the overall World Cup.

“With Jaroslav Kulhavy and Miguel Martinez we have two massive stars at the start. We are delighted and incredibly honoured that these two highly decorated bikers, who have both been Olympic champions, come to us in the region 3 Peaks Dolomites. We are excited to find out how they will do at our classic event. We are certain that we will be able to announce further top athletes to take part in the event,” Chair of the Organising Committee Kurt Ploner said. Already, 2200 mountain bikers from all corners of the world have registered for this year’s Dolomiti Superbike. The number of participants is limited to a maximum of 4000.

This year, all eyes will also be on the new route. In addition to the classic routes, the 121 km long distance with an elevation gain of 3400 meters, and the 60 km short distance with an elevation gain of 1570 meters, the organising team decided to add a medium route at this year’s 27th edition of the Dolomiti Superbike. Athletes will tackle a distance of 85 kilometres and 2400 meters of ascent. Also new is: participants who have registered for the 121 kilometres marathon but who do not make it to Carbonin in time, can run the middle distance instead and so do not drop out of the classification.

Registrations for the South Tyrol MTB classic continue at full speed. Registrations are open on the official Dolomiti Superbike website www.dolomitisuperbike.com and the page of official timekeeper Datasport. Until 30 June the start fee remains 100 Euros.

What makes the Dolomiti Superbike so special?

Since its first edition in 1995, thousands of passionate bikers have been following the call of the Dolomiti Superbike every year. From the beginning, start and finish have been in Villabassa. In 2006 and 2007, the popular South Tyrolean mountain bike marathon counted as a World Cup stage, and in 2008 the World Champions were crowned in Val Pusteria. Except for the Covid-related cancellation of the event in 2020, the mountain bike race in the heart of the UNESCO World Heritage of the Dolomites took place every year. In addition to the field of participants filled with high-level mountain bikers, the Dolomiti Superbike also impresses  with its excellent organisation and the breathtaking panoramic views of the 3 Peaks Dolomites region.